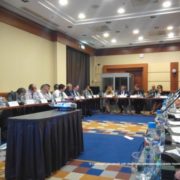 Regarding detection of nuclear and radiological smuggling, the delegations addressed measures implemented to enhance the export control, apply advanced practices, and improve protection of crucial border posts and land borders.

The discussion of response to nuclear and radiological smuggling focused on the measures on nuclear forensics, improvement of prosecution and condemnation of unauthorized carriers of nuclear and radioactive materials, criminal code enforcement, development of a national plan to respond to smuggling cases, and organization of international cooperation.

Under discussion of counteracting nuclear and radiological smuggling, the participants mentioned the Amnesty Project, envisaging implementation of appropriate measures on voluntary transfer of radioactive materials.

The representative of the State Agency of Ukraine on the Exclusion Zone Management informed on the current status of this project.

The project is implemented in three stages. The first stage covered amendment of Article 265 of the Criminal Code of Ukraine on voluntary transfer of radioactive materials. A relevant draft Law of Ukraine was developed by the State Agency of Ukraine on the Exclusion Zone Management to meet Cabinet Resolution No. 26186/3/1-12 dated 23 January 2013. The draft law is intended to define appropriate legal grounds to waive the responsibility from individuals that voluntary surrendered radioactive materials to authorities (radiation sources, radioactive materials or nuclear materials in any physical state in a package, product, or in another form). The draft law has been submitted twice to the Government of Ukraine, but has not yet been adopted due to the political situation in Ukraine and change in the government. Currently, the document is under re-approval at the Cabinet of Ministers and is to be submitted to the Government.

The second stage involves implementation of the pilot project “Social Campaign to Collect Orphan Radioactive Sources from the Population in the Donetsk Region” under US technical assistance. The intentions to implement this project in the Donetsk region are due to major man-induced impacts (an aggregate of industrial enterprises: metallurgic plants, coalmining enterprises, oil and gas industry plants). In implementation of the pilot project, information shall be distributed on the harm that can be caused by radiation sources to human health and the environment, if handled improperly. During discussion of this stage, the participants mentioned the website on nuclear safety issues, radiation protection and nuclear weapons non-proliferation (Uatom.org), as an efficient instrument to inform the public on effects from unauthorized use of orphan radiation sources.

The third stage is aimed at selecting another territory for the public campaign on collection of orphan radiation sources from population.

The cooperation in counteracting nuclear and radiological smuggling is especially important under Russia’s occupation of the Autonomous Republic of Crimea and continued aggression in eastern Ukraine.

According to the US Embassy [http://ukraine.usembassy.gov/press-releases/us-ukraine-nuclear-06242015.html]: given seizures of weapon-usable nuclear material, which suggest that additional materials could be available in illegal circulation, the parties noted the importance of continued vigilance to ensure these dangerous materials do not fall into the hands of terrorists or other criminals who might use them for malicious purposes.

The USA and Ukraine highly appreciated the achieved progress in countering nuclear smuggling and pledged their commitments and willingness to work together on these issues through further collaboration.

Opening of Odessa Center for Nonproliferation
Scroll to top