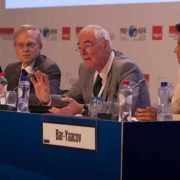 About 200 participants from private and public sectors of different countries gathered to discuss urgent aspects related to non-proliferation of weapons of mass destruction (WMD) and disarmament.

The conference subject became important in view of current international political situation. Despite of positive changes in WMD non-proliferation resulting from the successful destruction of declared chemical weapons in Syria and significant progress in the Iran nuclear negotiations, today’s political regional challenges require greater international efforts to address them since they destabilize the entire non-proliferation system.

Fighting in the eastern part of Ukraine and annexation of the Crimean peninsula were mentioned several times during the conference in the context of their impact on changing political climate in the world. Joëlle Jenny, a representative of the European External Action Service, pointed out the opinion of some experts that the Crimea annexation confirmed that Ukraine never had to give up nuclear weapons located on its territory until 1991. At the same time, she stressed that otherwise the Ukrainian crisis would be much more dangerous today in case of disputes over nuclear weapons control.

Ahmet Üzümcü, Director-General of the Organization for the Prohibition of Chemical Weapons, reported on progress in the destruction of Syrian chemical weapons and noted that currently all declared chemicals (1,300 tons) were transported from the territory of Syria, and 95% of them were eliminated.

Angela Kane, a UN Representative for Disarmament Affairs, noted in her speech that nuclear weapons were fundamentally illegitimate, and progress on non-proliferation required disarmament.

It should also be noted that on the eve of the Conference, on 3 September 2014, the European Non-Proliferation Consortium jointly with the International Network of Emerging Nuclear Specialists held “New Generation” workshop.

Young experts, PG students, and researchers from 19 countries being at the early stages of their career participated in the workshop. The workshop is aimed at the provision of an interactive platform where participants would present their efforts and discuss current issues of non-proliferation and global security.

During the workshop, participants discussed the issues related to the abovementioned conference. The main topics included Syrian chemical weapons, challenges and improvement of nuclear security, balance between peaceful use of nuclear energy and nuclear proliferation risks. The young experts presented new and creative solutions of current international security issues.

Dmytro Chumak from the State Scientific and Technical Center for Nuclear and Radiation Safety, www.uatom.org editor, also participated in the workshop. He presented a report on possible options to strengthen and improve the international trading system in nuclear energy. He noted the importance of the Nuclear Suppliers Group, while stressing that meeting the requirements of this organization is not mandatory from a legal point of view, which reduces effective control of international export-import operations and may cause new challenges for the non-proliferation regime.

Cooperation between USA and Ukraine to Counteract Nuclear and Radiological ...
Scroll to top