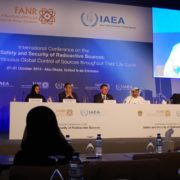 The International Conference on the Safety and Security of Radioactive Sources: Maintaining Continuous Global Control of Sources throughout Their Life Cycle (hereinafter referred to as the Conference) was held 27-31 October, 2013 in Abu Dhabi, United Arab Emirates. The Conference was organised by the International Atomic Energy Agency (IAEA). The Conference participants were warmly hosted by the Government of the United Arab Emirates (UAE) placing the main responsibility on the Federal nuclear regulatory authority. The process of preparing to and arranging the Conference had also involved such organisations as International Criminal Police Organisation (Interpol), International Commission on Radiation Protection (ICRP), International Association of vendors and manufacturers of the sources and the World Institute for Nuclear Security. It should be noted that 320 participants from 87 IAEA member states, one representative from a non-member state and 6 interstate bodies took part in the Conference proceedings. A presentation by the Ambassador Hamad Al Kaabi, the President of the Conference

Ukraine took an active part in the Conference. Today the country is implementing the best international practices in the area of ensuring safety and security of radioactive sources. This issue bulks large in the policy of our country, and, accordingly, it participates actively in the international initiatives in this area. Simultaneously, it implements an active policy in finding the “orphan” sources and enhancing control of vulnerable radioactive sources. At the same time, it should particularly be mentioned, that a large number of sources found on the territory of Ukraine doesn’t mean that the system of control proves ineffective, quite the opposite, this goes to prove that there is an effective search system in place. Moreover, Ukraine reports to the IAEA, that for every source found, it has chosen a straightforward and transparent policy in this matter: we always notify when we find and show our results. In such manner, minimising the issue and maintaining control are possible, to this end it is required to have an effectively functioning system to enable effective response – that is why the topic of the Conference is so relevant to Ukraine. The importance of the topic of the Conference to Ukraine was highlighted by participation of Olga Makarovska, the Deputy Chairperson of Ukraine’s regulatory authority, whose competent recommendations given in the course of the Conference were taken on board and included in the Conference’s final document. On the right: Olga Makarovska, the Deputy Chairperson of Ukraine’s regulatory authority

The first Section was dedicated to discussions on 10 years of implementing provisions of the Code of Conduct on ensuring safety and security of radioactive sources, main achievements and lessons learned throughout this period of time. In his concluding remarks, the President of the Conference, the Ambassador Hamad Al Kaabi, a full-time UAE ambassador to the IAEA, mentioned the Code to be a significant contribution in enhancing infrastructure of national regulation in the area of maintaining safety and security of radioactive sources, while in many cases, where such infrastructure didn’t exist before, the Code had encouraged its development. As a result, a number of radiation accidents, which could have led to serious exposures had noticeably decreased.

The second Section focused on reviewing institutional, regulatory, and legal framework for ensuring safety and security of radioactive sources. Some of the Conference participants were making a call for a corresponding legally binding convention instead of the voluntary Code, or in parallel with it. This issue sparked interest and resulted in discussions on advantages and main problematic aspects of the possible convention. On the one hand, the supporters mentioned that such a document would aid in enhancing control of radioactive sources, while, on the other, some of the participants noted the complexity of drafting a universal convention, which would have an all-round support at the international level, based on experience with the Code where 119 countries had made the corresponding political statements. Therefore, the consensus was not reached at that moment. In the concluding remarks by the Ambassador Hamad Al Kaabi, the President of the Conference, it was recommended that the IAEA called for a working group to evaluate advantages of the possible convention, which would help make a decision on the future of the discussed legally binding document. At the same time, the IAEA Secretariat expressed its willingness to continue discussions on this matter.

At the third section, the participants exchanged their experience in introducing the current consistent approaches to enhancing safety and security of radioactive sources at the national level. In this context, representatives of the IAEA member states were presenting their national, bilateral, as well as multilateral effort and initiatives. The Conference outcomes attested that national infrastructures for maintaining safety and security of radioactive sources were still demonstrating a number of deficiencies, especially in the long-term perspective of spent sources management. That is why in the Conference recommendations it was noted that additional guidelines at the international level for a long-term use in the spent sources management had to be developed and harmonised with the development of a national policy. It was also recommended that the IAEA arranged discussions on other possible options of resolving this problem point.

The fourth Section was devoted to discussions on the ways of improving control of movements of radioactive sources worldwide, including control over import and export, as well as return and repatriation of the no longer used withdrawn sources. Based on the results of discussion, in the Conference recommendations it was noted that regional and international cooperation programmes, which were underway throughout last years, had been very successful from the viewpoint of providing assistance to countries in developing their own infrastructure for ensuring safety and security of radioactive sources, that is why such cooperation, whenever possible, has to be continued with the account taken of difficulties related to the current condition of the world’s economy. Ukraine is one of the few member states that demonstrated the experience in resolving the issue of managing the “historic” spent radioactive sources by launching campaigns in the framework of implementation of national and international programmes. The result of these programmes having been completed from 2009 to 2013 is the extraction of 14755 spent radioactive sources with the total activity of 34000 Ci from 78 enterprises-users including from those, which went bankrupt.

The seventh Section was dedicated to discussions on eliminating emergencies, as well as on safety and security in the course of taking measures related to radioactive sources. This section was very important since representatives of the affected countries, such as, for instance, India, Indonesia etc., gave a review of their national experience in overcoming problems posed by incidents involving radioactive sources. The corresponding conclusions were drawn based on these data. Olga Makarovska proposed that the IAEA resumed works on publishing information on casualties occurred as a result of unauthorised and incorrect use of radioactive sources, aiming at the exchange of relevant experience in order to learn the corresponding lessons. Regrettably, accidents do happen, therefore, it is necessary apply maximal effort in order to prevent recurrence of potentially catastrophic consequences. Hence, the Conference recommended the IAEA to continue with publishing the corresponding reports.

Participants of the eighth Section were discussing the integration processes between nuclear safety and security, their influence on enhancing effectiveness of control, as well as protection of radioactive sources. The Conference participants noted the recent positive changes in the IAEA’s approaches to interrelation between nuclear safety and nuclear security. These changes would also have a positive effect on resolving the problem points related to ensuring the required level of safety and security of radioactive sources. It should be noted that every of the discussed areas of activity has its contribution to ensuring radiation protection of the cycle of man and society. Despite different nature of activities, they combined make a maximally effective system, however, not all of the interaction issues are resolved, hence, the Conference made a call to the IAEA Secretariat for continuation of the effort in maintaining coordination activities in the areas of nuclear safety and nuclear security and elaborating the best effective mechanism of interaction.

The concluding session of the Conference was dedicated to the strategies and possible options of employing new information technologies for communication with public on the issues of safety and security of radioactive sources. The Conference highlighted the importance of involving stakeholders at the stage of planning a strategy for public relations in order for them to stay motivated and perform active work in this area continuously from the very beginning. Some of the Conference participants noted the necessity of introducing and conducting trainings on a regular basis for stakeholders to master effective dialogue with public. Presentation by Dmytro Chumak, editor-in-chief of the UAtom.org website

During this Section the presentation was made by Dmytro Chumak, the leading engineer of the Information Support Section of the Scientific and Technical Centre for Nuclear and Radiation Safety, and editor-in-chief of the UAtom.org website. The subject of his presentation was “UAtom.org as a platform for communicating with general public on the issues of safety and security of radioactive sources”.

11th Ukrainian Conference of Physical Protection, Accounting for and Control...