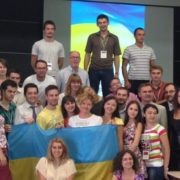 The important aspects of nuclear weapons non-proliferation were discussed from 20 to 25 August 2014 during the international summer school in Odesa. It was arranged by the Odesa Mechnikov National University and Swedish Radiation Safety Authority.

The participants of the Summer School

The goal of this school was to raise awareness among the participants in the sphere of nuclear weapons non-proliferation. The objectives of this event were also to create a national and regional community of young experts in nuclear weapons non-proliferation. The participants were students, post-graduates, young experts, representatives of governmental establishments and scientific and research institutes of Ukraine, Moldova, Georgia, and Poland.

The subject of this school became very important in view of the current situation in Ukraine as well as statements related to possible change in the state’s attitude to nuclear status. World experts who acted as scientific mentors during the week made competent and professional comments for young experts. The summer school program covered general aspects of the main subject of this event. Robert Kelley, former IAEA inspector, shared information on the IAEA system with the school participants.

The lecture by Lina Grip from the Stockholm International Peace Research Institute on the EU strategy related to weapons of mass destruction was interesting and useful in terms of nuclear weapons non-proliferation and nuclear security in Europe. Further, lectures were given to outline nuclear programs in European countries. Benoît Pelopidas from the University of Bristol told about the historical aspects as well as the current state of nuclear programs of France and Great Britain. Thomas Yonter from Stockholm University shared Swedish experience in the field of non-proliferation. Polina Sinovets’ from the Odessa Mechnikov National University gave a lecture on NATO nuclear policy. She paid special attention to American tactical nuclear weapons located in Europe.

The next topic was devoted to basic nuclear security aspects. Lars van Dassen from the Swedish Radiation Safety Authority presented data based on his own experience in nuclear security summits. He described the entire process of these summits, its main advantages and disadvantages, and shared his vision about the future of such forums. Dmytro Cherkashyn from the Sevastopol National University of Nuclear Energy and Industry emphasized the importance of these nuclear security summits for Ukraine and their impact on development of this aspect at the national level.

Individual lectures were devoted to nuclear non-proliferation in Asia. Dauren Aben from the Kazakh Institute of Strategic Investigations together with Thomas Yonter, who presented useful information on nuclear renaissance in Asia and potential challenges and prospects, emphasized the role of Central Asia in developing nuclear potential of the Soviet Union as well as modern regional threats to the nonproliferation regime. At the same time, Dauren provided a presentation on nuclear doctrine and non-proliferation policy of China. Serhiy Halaka from the Institute of International Relations at the Kyiv National Taras Shevchenko University outlined nuclear programs in Asian countries (India, Pakistan, North Korea) posing the greatest challenges to the nonproliferation regime, as they have nuclear weapons and are not a part of the Non-proliferation Treaty. Robert Kelley told about the issues related to non-proliferation safeguards and Pakistan based on his personal experience and observations.

The school program covered also non-proliferation of weapons of mass destruction in the Middle East. Polina Sinovets’ described new opportunities for international cooperation having analyzed the retrospective of the Iranian problem. Mark Hibbs described Iranian cooperation with the Russian Federation in the nuclear field.

The summer school participants could test their knowledge and diplomatic skills in a model situation: they had to find a way to solve current problems in Ukraine resulting from non-fulfillment of safeguards under the Budapest Memorandum by negotiation with the Russian Federation, United States and Great Britain.

The participants appreciated the summer school efforts and role for further study or career:

I am a second-year student under the Master’s degree programme at the National Technical University of Ukraine ‘Kyiv Polytechnic Institute’, power engineering specialty. Owing to this school, I have realized that nuclear power has two sides of the coin: one side is beneficial for the society in satisfying energy demands, and the other may be life-threatening for this society. I have also realized that technical safety is not sufficient for consistent and reliable cooperation in the field of nuclear energy; a powerful database, independent regulatory authorities, political stability and mutual trust between the countries in the whole world are required for, and exactly the latter aspect is extremely difficult to achieve. I would like to mention that although my education is technical and this school is rather humanitarian, it has broadened my horizons, drew attention to the progress in power energy and nuclear weapons around the world, their historical background and development, and demonstrated IAEA activities and policies in detail. This contributed greatly to my self-development as a specialist in nuclear energy and to my career. In my opinion, this symbiosis promotes training of educated and competent specialists who can realize and solve problems efficiently.