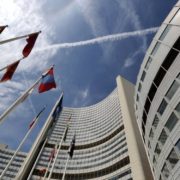 During the exercise, experts from the IAEA member states, member states of the Convention on Early Notification of a Nuclear Accident and Convention on Assistance in the Case of a Nuclear Accident or Radiological Emergency had to respond to a situation related to a simulated severe radiological accident. According to the training scenario, called Bab Al Magrib, a simulated explosion of a dirty bomb occurred in the port of Tanger-Med and the city of Marrakesh (Morocco) with the threat of transboundary and transnational impact on neighboring states. Thus, the involved experts should conduct training on immobilization of all the forces to minimize consequences of the simulated radiological accident and assist the country or countries that requested assistance.

On an international scale, this exercise was aimed at testing international informational exchange on emergencies between the IAEA member states and members of the Conventions mentioned above. Moreover, this allowed the participants to adopt the best practices of partners through observing their actions or vice versa to share their experience in response to a radiological accident. At the national level, this exercise was aimed at testing all the channels of communication with appropriate state bodies and national emergency response mechanisms or bilateral arrangements.
For Ukraine, which had experience in overcoming the disastrous effects of the Chernobyl nuclear accident, participation in the IAEA exercise and experience exchange was of particular importance. This provided an opportunity not only to check its own strength, but also to observe how other countries respond to such situations. Since 1986 Ukraine consistently improves and optimizes the mechanisms of warning and response to the consequences of accidents and emergencies at nuclear and radiation hazardous facilities. After the events at Fukushima, the President of Ukraine, Viktor Yanukovych, at the High Level Meeting of the General Assembly in 2011 emphasized the need to improve the above-mentioned mechanisms, thereby noting concerns of Ukraine on this issue and its seriousness as regards approaches to solve this problem. Thus, today we can state that a communication system required in case of a nuclear accident has been established and functions effectively due to joint efforts of relevant state agencies of Ukraine.

It should be noted that SNRIU and State Service of Emergency Situations (SSES of Ukraine) took part in the ConvEx-3 exercise from the Ukrainian side. In compliance with the Convention on Early Notification of a Nuclear Accident, Convention on Assistance in the Case of a Nuclear Accident or Radiological Emergency and Resolution No. 1570 of the Cabinet of Ministers of Ukraine dated 2 October 2003, these institutions are competent national bodies in the event of a radiological emergency.

Successful completion of the exercise was due to the team efforts of the Emergency Center staff of the Nuclear Regulatory Inspectorate of Ukraine. SSES of Ukraine also fulfilled its tasks at high level.

It was confirmed that SNRIU would be able to give the Government timely recommendations on necessary response measures at state level and to inform the public about possible consequences of an accident abroad. For example, the Nuclear Regulatory Inspectorate conditionally recommended the Government to inform Ukrainian citizens and ships abroad on restrictions of movement in certain regions, the need to enhance radiation monitoring at borders, and the need to assist citizens in the affected area. It was also confirmed that SSES of Ukraine and SNRIU would be able to respond to requests for assistance (conditionally it was proposed to send two specialized military forces to Morocco and 3 SNRIU experts to IAEA for assistance). It should be noted that the State Service of Emergency Situations of Ukraine performs functions of a competent body authorized to send and receive requests for assistance in the event of a nuclear accident or radiological emergency and to receive suggestions for assistance.

SNRIU experts showed high professional level during the exercise. They clearly defined the radiological situation caused by conventional explosion of a dirty bomb and used initial information to almost precisely assess activity of the radioactive source employed in the conventional explosive device. This was reported by Olga Makarovska, Deputy Chairperson of the State Nuclear Regulatory Inspectorate of Ukraine, Head of Crisis Staff. The data analysis group experts also predicted the absence of any early radiation consequences for Ukraine in a precise and timely manner, about which the public was conditionally informed.

The experts of SNRIU Crisis Staff analyzed on-line information that came from IAEA and other states, made forecasts of the situation based on actual weather conditions, transmitted prompt information (actual and conditional) for the Cabinet of Ministers of Ukraine, SSES of Ukraine, Security Service of Ukraine and other central executive bodies, as well as issued press releases. In its turn, the State Service of Emergency Situations dealt with issues to provide assistance to Morocco.

This exercise determined the need for Ukraine to strengthen the communication group for effective implementation of recommendations on the exercise results and confirmed Ukraine’s preparedness to respond adequately to radiological emergencies.

The lessons learned during the exercise can be used not only in case of explosion of a dirty bomb, but in the case of nuclear and radiation accidents with other initiating events.

Based on result of the exercise, proposals for improving emergency response measures at both national and international level will be prepared.

International Conference on the Safety and Security of Radioactive Sources throughout...

Summary SNRIU Board Meeting: More Actions Than Planned in 2013
Scroll to top