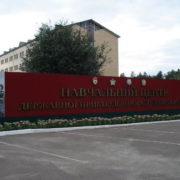 A regular training exercise in detecting nuclear and radioactive materials and response to the detection cases (Training) has been held from 30 September to 3 October at the premises of the Training Centre of the State Border Guard Service of Ukraine (the city of Cherkassy). The Training, held with financial support from the Swedish Radiation Safety Authority (SSM), was aimed at improving the knowledge of representatives from various governmental authorities, which are involved with activities related to nuclear and radioactive materials in the issues of detecting and preventing the incidents of illicit trafficking through the State border of Ukraine, transit shipments through the Ukraine’s territory, and trafficking or sales of the discussed materials. The Training has gathered the representatives from the State Service of Ukraine for Emergencies, the Armed Forces of Ukraine, the State Environmental Inspection, the State Nuclear Regulatory Inspection, the State Security Service, and the State Border Guard Service of Ukraine. Involving experts from the aforementioned State authorities and the format of the Training foster the objective of meeting Item 12 of the National Plan for 2013-2014 of Implementation of the Communiqué of the Seoul Nuclear Security Summit, as approved by Decree of the President of Ukraine of 11 February, 2013, No. 73/2013, notably, “to implement measures on strengthening interdepartmental coordination […] aiming at counteracting the illicit trafficking of nuclear and radioactive materials and preventing the acts of nuclear terrorism”. In illicit trafficking, a great deal of attention is paid to response, which main objectives are to: minimise any potential hazard to health of population; place radioactive materials under the corresponding control; investigate and gather evidences, prosecute the delinquents.

Today, the international community considers counteracting the illicit trafficking of nuclear and other radioactive materials as one of the priorities in a global effort to abate the threats of proliferation of nuclear weapons and nuclear and radiation terrorism. Item 7 of the Law of Ukraine of 19 June, 2003, No. 964-IV “On the bases of the national security of Ukraine” reads that “criminal activities against peace and safety of the humankind, primarily, the spread of international terrorism” and “the threat of using nuclear and other facilities on the territory of Ukraine for the purposes of terrorism” are the real and the potential threat to the national security of Ukraine, as well as to stability in the society. At the same time, it should be noted, that as of today, not a single fact of a nuclear terrorism event has been established to occur. Contrastingly, there are quite a few events with illegal possession of nuclear and radioactive materials. While taking into account that any act of terrorist activity may be conducted with the use of either a nuclear material or a facility, the catastrophic consequences may exceed manifold the results of an ordinary act of terrorism, counteracting the illicit trafficking of nuclear and radioactive materials requires a close attention to be paid at the higher political level in both global and national scales.

One of the most important steps towards resolving the discussed issues are the training and exercise events. The Training Centre of the State Border Guard Service of Ukraine in Cherkassy is the ideal institution, where it is possible to acquire theoretical and practical knowledge in various aspects of illegal movements of nuclear and radioactive materials through the State border of Ukraine. The Centre is the State vocational education institution of the third certification level. It provides training, professional development, and advanced vocational training for junior personnel of the State Border Guard Service of Ukraine. One of the areas of training and professional development of junior personnel is to study the procedure of detecting ionising radiation sources being in illicit trafficking at the Sate border of Ukraine.

This Training is conducted by highly qualified experts of the Training Centre of the State Border Guard Service of Ukraine, namely, by M.G. Kuznetsov and Yu. O. Sklianchuk who have been frequently attending the international conferences and workshops, as well as taking part in other events devoted to the topic of the Training. They have been giving lectures and making presentations at the same type training exercises organised by the IAEA, the United States Department of Energy, etc. Their deep understanding of the range of issues of the illicit trafficking aids in a well structured, understandable, and easy to percept treatment of the training materials, which have been not once pointed out by the Training participants.

Particularly, it stands to mention the use of various methods of delivering the materials in the course of the training process. Throughout the whole period of training the lecturers provided the attendees with an opportunity to learn and master the material better though watching popular science and theme-based video films.

The status of global security of tomorrow will depend on what have we done to strengthen it today. Based on the fact that nuclear terrorism represents one of the main problems of international security, it is necessary to make any possible effort in preventive measures. That is why it is of the utmost importance that personnel of the relevant authorities involved have the practical experience in radiation monitoring and in other areas of combating the illicit trafficking of nuclear and radioactive materials. In the framework of resolving this issue, on the 3rd day of the Training the participants performed 4 laboratory-based works with the aim of mastering practical skills, primarily, in the area of radiation monitoring. The first hands-on case study was devoted to measuring radiation with the use of engineering means of radiation monitoring; the second was to identify dependence of value of the exposure dose rate in different measurement points. In the course of the third lab work the participants ran radiation measurements with the use of engineering means of radiation monitoring and shielding of materials. During the fourth hands-on case study the participants had studied the procedure of calibrating the spectrometry instrumentation and made analysis of spectra depending on the type of shielding material. With the aim of deepening the practical skills in detecting nuclear and radioactive materials and responding to cases of detecting those, in the course of the last day the Training participants performed 4 practical training exercises. Each of the exercises was aimed at makeup work in appropriate use of radiation monitoring devices; locating a radioactive source with meeting all requirements of radiation protection, and selecting the best effective procedure of searching for a radioactive source. The participants were proposed with the situations where under different conditions and in different transport vehicles there was a radioactive source detected by the portal monitors «Yantar» and MARK. The Training attendees were making the primary inspection of the transport vehicles. After the source had been found, they took the necessary response and interaction measures, collected the required data leading the situation to its logical end. These exercises made it possible for the participants to master the algorithm of actions in case of such an occurrence in reality, and practice the scenario of interaction between the relevant authorities. The results of practical exercises were very effective since they allowed identifying gaps in the regulatory basis for the process of detecting nuclear and radioactive materials at the State border, and responding to the detection cases, as well as the issues of interacting between the relevant authorities.

11th Ukrainian Conference of Physical Protection, Accounting for and Control...
Scroll to top