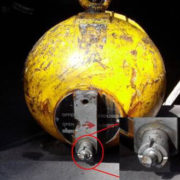 According to the South-Eastern State Inspection on Nuclear and Radiation Safety (SNRIU), the staff of the Yenakiieve Iron and Steel Works revealed a container with radiation source during a walk-down of the territory for clearing of wagons from scrap metal on 24 July 2015. Blocking mechanism for switching modes of the radiation source was in the “closed” position.

Previously, this equipment was used by a small private company “BIK” located in the former mine No. 70 (Kondriuche village, Sverdlovsk region, Luhansk oblast) for monitoring of dry coal cleaning.

Awaiting a solution on transfer of the container with radiation source to a specialized radioactive waste management facility, the container is temporary stored in the storage facility for radioactive isotopes of the PJSC Yenakiieve Iron and Steel Works.

The radiation source beyond regulatory control caused no harm to the public and environment.

Press conference of the SNRIU Chairman on refuting ecologists’ allegations...