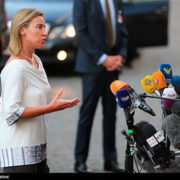 In an interview with the French weekly Le Nouvel Observateur, Mogherini said Russia had acted as a constructive partner in the resolution of at least three important international issues, including the Iranian nuclear program.

“I will not speak for the Russians and their interests. But we managed to conclude an agreement on Iran (nuclear program) because we were not afraid to come to the table, having mutual interests,” Sputnik quoted her as saying on Sunday.

Iran and the Group 5+1 (Russia, China, the US, Britain, France and Germany- also known as P5+1 or E3+3) on July 14 reached a conclusion over the text of a comprehensive 159-page deal on Tehran’s nuclear energy program.

Elsewhere in the interview, Mogherini emphasized the need for formation of a new international alliance against Daesh (ISIL) Takfiri terrorists and said as far as Syria is concerned, the EU is first of all interested in Syria’s stability and territorial integrity.

Syria has been entangled in civil war since March 2011. The ISIL Takfiri group now controls parts of it, mostly in the east.

In the past four and half years, more than 250,000 people have died in Syria -overwhelmingly civilians- and around 4 million Syrians are now refugees in other countries. Around 8 million others have been displaced internally.

Roundtable “Should One Look for Blue Oceans in the Peaceful Atom?”