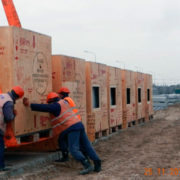 The Double-Wall Canister (DWC) is the heart of the interim dry storage system NUHOMSÒ which will be implemented at the ISF-2 for the long-term interim storage of spent nuclear fuel (SNF) from Chernobyl NPP RMBK-1000 reactors. The main purpose of the DWC is to ensure 100 years (ISF-2 design service life) of dry, interim, environmentally isolated storage of SNF in an inert gas environment.

The DWC system consists of an enclosure vessel made of two welded leak-tight shells (canister) which form two separate confinement boundaries to potential spread of radioactive materials, an internal basket and Fuel Tubes (FT), and is designed for horizontal placement of each DWC inside the individual compartments of the concrete storage module (CSM).

DWC belongs to the ISF-2 equipment which is important to safety.

DWC is designed and manufactured by Holtec International, USA (the Contractor).

On the basis of the “Technical Specification for Fabrication and Supply of ISF-2 DWC” developed by the Contractor and preliminarily approved by the SNRIU and the equipment design package at Holtec Manufacturing Division in Pittsburg (USA) the first (pilot) batch of five DWC’s was manufactured.

In July 2014 on the basis of the “DWC Factory Acceptance Test Program” approved by the SNRIU the factory acceptance tests (FAT) were performed for the DWC pilot batch, the tests were attended by the Employer’s and the SNRIU representatives.

The FAT demonstrated that serial manufacturing of DWC’s could be started on condition that deficiencies revealed during tests of the pilot batch would be rectified and the technical specification amended accordingly.

The “Technical Specification for Fabrication and Supply of ISF-2 DWC” was approved by the SNRIU in July 2015.

The Holtec Manufacturing Division is now in the process of serial manufacturing of DWC’s.

In accordance with the Programme of Performance, on 24th and 25th November 2015 the first batch of ten DWC’s with fuel tubes (Lot 1 and Lot 2) was delivered to the ChNPP site.

Ten DWC’s with fuel tubes will suffice for the ISF-2 5-month operation with design capacity.

The plan is that by the date of completion of Phase 1 WR-2 of the contract (until the date of the ISF-2 handover from the Contractor to the Employer) about 85 DWC’s will be delivered, which will be sufficient for the ISF-2 operation with design capacity during 3 years and more. The remaining DWC’s (the total number up to 231 DWC’s) will be delivered in the period from 2017 to 2019.