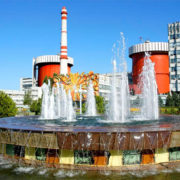 The board of the State Nuclear Regulatory Inspectorate of Ukraine (SNRIU) has approved the continued operation of unit 2 of the South Ukraine nuclear power plant until the end of 2025. The unit was shut down on 10 May, two days before the expiry of its design lifetime, for major upgrading over 300 days costing $114 million to enable a 10-year life extension. Energoatom, the state-run operator of all 15 of Ukraine’s nuclear power reactors, said today that SNRIU had approved the life extension for South Ukraine 2 at a board meeting on 7 December. The meeting was attended by representatives of, among others, Energoatom, the Ministry of Energy and Coal, the Ministry of Ecology and Natural Resources, the European Bank for Reconstruction and Development, and the press.

The unit is to be reconnected to the grid on 17 December.

SNRIU approval confirms the long-time safe operation of the unit according to radiation and nuclear safety inspections, Energoatom said. “The board has entrusted the department for nuclear plants safety issues with preparing and submitting for approval to the SNRIU licensing committee changes to the licence submitted by Energoatom for the extension to the operation of South Ukraine,” it said.

The regulator stated that Energoatom had applied for the lifetime extension on the basis of Ukraine’s energy strategy for the period ending in 2030.

Citing SNRIU chairman Sergey Bozhko, Energoatom said it had taken all the actions necessary for the unit’s lifetime extension. Energoatom president and CEO Yury Nedashkovsky said the extension is not merely a corporate issue, but a matter that improves the country’s energy security of supply.

Nuclear power is key to the industrial, commercial and residential sectors, Nedashkovsky said. The share of electricity generated by the nuclear industry has increased from 46% to 56% and at times accounts for as much as 60% of total energy consumption in Ukraine, he noted. The decision to extend the operating life of South Ukraine 2 is therefore “crucial for Ukraine’s energy mix”, he added.

Upgrading work at the reactor included replacement of obsolete equipment and implementation of ‘post-Fukushima’ safety measures, he said. This process also included regular public hearings at which the company explained its work at the unit.

The South Ukraine plant is located on the banks of Pivdennyi Buh river in the town of Yuzhnoukrayinsk, in the Mykolayiv region. It consists of three VVER-1000 reactors with a total installed capacity of 3000 MWe. Unit 3 is undergoing scheduled maintenance work. Also near the river are two twin-unit hydro power plants.