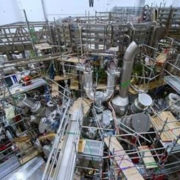 After more than a year of technical preparations and tests, the Wendelstein 7-X stellarator has produced its first helium plasma. Assembly of the Wendelstein 7-X – the world’s largest stellarator-type fusion device – at the Max Planck Institute for Plasma Physics (IPP) in Greifswald, Germany, began in April 2005 and was completed in April 2014. The operational preparations have been under way ever since.

Each technical system – the vacuum in the vessels, the cooling system, the superconducting coils and the magnetic field they produce, the control system, as well as the heating devices and measuring systems – has been tested in turn.

On 10 December, the operating team in the control room started up the magnetic field and initiated the computer-operated experiment control system. It fed around one milligram of helium gas into the evacuated plasma vessel and switched on the microwave heating for a short 1.3 MW pulse. The first plasma could be observed by the installed cameras and measuring devices.

The first plasma in the machine had a duration of one-tenth of a second and achieved a temperature of around one million degrees Celsius.

The next task will be to extend the duration of the plasma discharges and to investigate the best method of producing and heating helium plasmas using microwaves.

Project leader Thomas Klinger said, “We’re starting with a plasma produced from the noble gas helium. We’re not changing over to the actual investigation object, a hydrogen plasma, until next year.” He added, “This is because it’s easier to achieve the plasma state with helium. In addition, we can clean the surface of the plasma vessel with helium plasmas.”

Wendelstein is a stellarator fusion reactor – different to a tokamak fusion reactor such as the Joint European Torus in the UK or the Iter device under construction in France. A tokamak is based on a uniform toroid shape, whereas a stellarator twists that shape in a figure-8. This gets around the problems tokamaks face when magnetic coils confining the plasma are necessarily less dense on the outside of the toroidal ring.

Wendelstein 7-X is to operate for two years without active cooling, during which time it will be able to operate for about 50 seconds at 1 MWt, or at 8-10 MW for 5-10 seconds. The machine will then undergo an 18-month shutdown when it will be fitted with an actively cooled divertor for heat fluxes of up to 10 MWt per meter squared. This will bring Wendelstein 7-X to its full steady state capacity.

Some €370 million ($408 million) has been invested in the Wendelstein 7-X project, with funding from federal and state governments and the European Union.