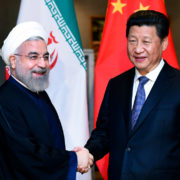 Iran and China are planning to develop cooperation in various nuclear fields as international sanctions on Tehran have been lifted, Chinese atomic chief said.

At a meeting with his Iranian counterpart Ali Akbar Salehi, in Tehran, Xu Dazhe, the head of China’s Atomic Energy Authority, said that in addition to the reconfiguration of the Arak nuclear facility, Iran and China will continue nuclear cooperation on economic, research and industrial dimensions, IRNA news agency reported on Jan. 23. In turn, Head of the Atomic Energy Organization of Iran (AEOI) Ali Akbar Salehi, also called for the expansion of bilateral ties and elaborated on a memorandum of understanding signed between Iran and China to construct several nuclear power plants in the Islamic Republic.

According to Salehi, China will cooperate with Tehran in the construction of two nuclear power plants in Iran’s southern city of Bushehr which are expected to generate 1,000 megawatt of power.

He also added that the countries are planning the construction of several small power plants with the capacity of 100 megawatt.

In a joint statement on Jan. 16, the EU’s High Representative Federica Mogherini and Iran’s Foreign Minister Mohammad Javad Zarif announced the implementation of the Joint Comprehensive Plan of Action (JCPOA aka nuclear deal) and the removal of economic sanctions on Iran.

According to the statement, EU has confirmed that legal framework, providing for lifting of its nuclear-related economic and financial sanctions, is effective.

According to the terms of the JCPOA, a group of European countries, as well as Asian states such as Japan, China and South Korea are expected to cooperate with Iran to develop its nuclear program.

Earlier in January Iran removed the core of the Arak heavy-water nuclear reactor and filled it with cement as agreed under the nuclear deal.

Under the terms of the deal, Iran agreed the heavy-water reactor would be reconfigured so it will be incapable of yielding material for a nuclear weapon.

President Xi Jinping heading a high ranking delegation arrived in Tehran on January 23 on the third leg of his three-nation regional tour to the Middle East kicked on Jan. 19.

He earlier visited Egypt and Saudi Arabia as part of the five-day regional tour.