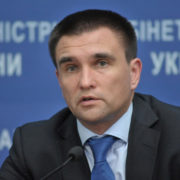 The minister reminded that Russia had violated paragraph 1 of the Budapest memorandum, which obliges  to respect the independence and sovereignty and the existing borders of Ukraine. “Russia has violated and further violates paragraph 2 of the Memorandum which stipulates that none of the weapons of the signatory states will be used against Ukraine,” Klimkin said.

He also said that the Russian Federation has been violating over the recent years paragraph 3 of the Budapest Memorandum, putting economic pressure on Ukraine.

In this regard, the head of the Ukrainian Foreign Ministry has raised the question: “Someone who is sure that they do not violate the Memorandum shouldn’t be concerned about holding such consultations.”

As UNIAN reported earlier, Russian Foreign Minister Sergey Lavrov said on Tuesday that Russia had not violated the Budapest Memorandum, because it never threatened Ukraine with nuclear weapons.

In particular, answering the question on how the Russia’s neighbors can ensure their security while the Russian Federation at any time can break its commitments, Lavrov said: “Budapest Memorandum includes a single commitment — not to use nuclear weapons against Ukraine. No one has, and the threat of use of nuclear weapons against Ukraine has never been voiced,” said Lavrov.