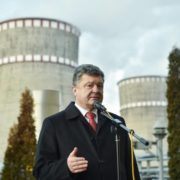 In the course of the working trip to Rivne region, the Head of State examined the nuclear power plant in Rivne city. Talking to the staff, the President noted that the energy sphere is among leaders in terms of the pace of reforms. “The first thing we can be proud of is energy independence,” Petro Poroshenko emphasized.

According to the President, in 2 years, Ukraine achieved “fantastic results” despite aggressive actions of Russia. “My congratulations! This winter was the first time Ukraine found enough strength to say “no” to Russian gas despite the fact that Russians cut off the gas supply completely and set the price 30% lower than the European spot price. Such a behavior towards Ukraine requires specific attitude because of the aggression, economic blockade and embargo. They will never put us down on our knees. We are confident of that,” the Head of State emphasized.

The President particularly noted that the launch of power line Rivne NPP – Kyiv substation allowed not only to cheapen the electricity and make the Ukrainian energy sphere more competitive, but also to ensure the energy security of Kyiv and Kyiv region and reduce the consumption of expensive thermal coal. “Today, Kyiv consumes cheap electricity from Rivne and Khmelnytskyi NPP and doesn’t use expensive thermal anthracite coal. This is due to your activity,” the President addressed the staff of the power plant.

The Head of State noted the importance of atomic energy for uninterrupted functioning of the energy system. He emphasized that there had been no rolling blackouts despite concerns and predictions of many politicians. The President praised the work of the power plant. “We are now convinced that everything works well and safely. I believe industrial reforms and economic competitiveness must begin with energy sphere. Two components – energy sphere and competitive investment climate let us attract investments. Your achievement is a great victory,” Petro Poroshenko emphasized.

The President expressed confidence that the Ukrainian energy sphere would have an “absolutely different future” in 5 years. “We are now finishing the contruction of Novodnistrovsk pumped storage unit. This will help increase the load level of atomic energy. We will also start using modern technologies of energy accumulation. Thus, we will not have any problems covering peak loads. At night, the NPP will work for accumulators and during the day – for consumers,” the President said.

On Detection of Radioactive Materials in Illicit Trafficking
Scroll to top