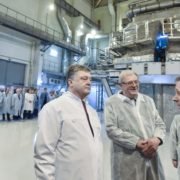 Today at the Kharkiv Institute for Physics and Technology, United States Ambassador Geoffrey Pyatt and Ukrainian President Petro Poroshenko attended a ceremony to mark the final stage of preparations to make the Neutron Source Facility fully operational.  The $73 million investment made by the United States in this state-of-the-art facility will provide Ukraine with new research capabilities and the ability to produce industrial and medical isotopes for the benefit of the Ukrainian people.  “I want to thank President Poroshenko for his continued support of this project, and I encourage the Ukrainian government to take the necessary steps to ensure this facility can begin its critical work as soon as possible.  I would also particularly like to congratulate the scientists of the Kharkiv Institute who were our partners in realizing this facility,” said Ambassador Pyatt.

The Neutron Source Facility is an example of the over two decades of successful cooperation between the United States and Ukraine in reducing the risks of nuclear terrorism in Ukraine and worldwide.  Nuclear security and nonproliferation have been hallmarks of President Obama’s presidency, and the Neutron Source Facility is a direct result of Ukraine’s decision to give up all highly enriched uranium during the Nuclear Security Summit in 2012.

On the eve of the upcoming Nuclear Security Summit in Washington, D.C., today’s ceremony represents another important milestone in our joint cooperation on nuclear security and nonproliferation issues.  The United States deeply values the leadership role Ukraine has taken in these critical areas, and we look forward to continuing to build this successful partnership.

The US Diplomatic mission to Ukraine

Poroshenko to hold series of meetings, to address nuclear security summit and...
Scroll to top