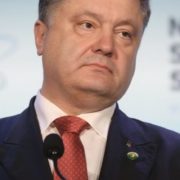 At the press conference in Washington, President Petro Poroshenko praised the initiative on holding the Nuclear Security Summit and emphasized the efficiency of discussing this issue at the highest level.  “It is important to share views and coordinate efforts. Holding this summit was a positive initiative and I would like to congratulate USA and personally President Obama on that,” the Head of State noted.

The President emphasized that Ukraine had made an important step towards global security by giving up the third nuclear arsenal in the world. However, the Budapest Memorandum didn’t ensure the fulfillment of security guarantees and the post-war global security system based on the decisions of the UN Security Council turned out to be inefficient when a permanent member of the Security Council is the country-aggressor. “We have discussed a new initiative on security guarantees for the countries that do not have a nuclear arsenal. It is a topic to be discussed in the future,” the President informed.

The Head of State emphasized that Ukraine had made a series of important steps in the issue of ensuring nuclear security. For example, Ukraine has eliminated more than 200 tons of highly enriched uranium. In addition, Ukraine has successfully launched the first nuclear facility of global importance “Source of Neutrons”. It will enhance security of Ukrainian nuclear power plants. Petro Poroshenko recalled that about 56% of Ukrainian electricity was produced by NPP.

The President reminded that the 30th anniversary of Chernobyl disaster would take place in April. “We had a fruitful discussion on that issue starting from cybersecurity and finishing with protection system of nuclear power plants where we can share experience and coordinate efforts in the creation of more efficient nuclear security,” Petro Poroshenko informed.

The Head of State noted that there were still a lot of challenges for the global security, inter alia, Russian aggression in Ukraine.

The President also mentioned productivity of bilateral negotiations between Ukraine and the EU, Japan, Australia, China and USA.