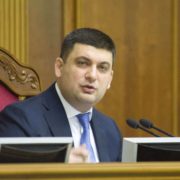 On Wednesday, Chairperson of the Verkhovna Rada of Ukraine Volodymyr Groysman had a meeting with the Ambassadors of the G7 countries (Canada, France, Germany, Italy, Japan, Britain and the United States). The parties discussed the issues of nuclear security in Ukraine, current political situation and the course of reforms in the country.

The Chairperson of the Verkhovna Rada expressed confidence that the issue of nuclear security must remain one of the priorities in the activity of the Ukrainian authorities.

The Chairperson of the Verkhovna Rada also noted that despite current political challenges in the country, last plenary week, the Parliament proved its ability to take important decisions. “I hope that the same tendency will remain during the forthcoming weeks. There is no alternative to reforms in Ukraine. That is absolutely obvious,” Groysman said.

In turn, U.S. Ambassador to Ukraine Geoffrey Pyatt noted that Ukraine is highly appreciated throughout the world for its unique historical experience in overcoming consequences of disaster that took place at the Chornobyl nuclear power plant and for the high technical level of Ukrainian specialists working in the field of nuclear security. The fight against bureaucracy will allow Ukraine to continue reformation in compliance with European practices, Mr. Pyatt added.

The G7 Ambassadors expressed readiness of their countries to further support reforms in Ukraine.