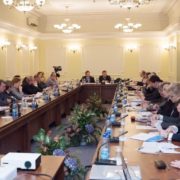 Participants of the hearings of the Verkhovna Rada Committee on Fuel and Energy Complex, Nuclear Policy and Nuclear Safety on “Strategic Development of Nuclear Industry in Ukraine” discussed urgent issues of the nuclear and energy complex. The hearings were held on 15 April with the participation of people’s deputies, representatives of state institutions, Energoatom and other nuclear enterprises. STRATEGIC DEVELOPMENT OF NUCLEAR INDUSTRY IN UKRAINE – HEARINGS OF THE VERKHOVNA RADA COMMITTEE ON FUEL AND ENERGY COMPLEX, NUCLEAR POLICY AND NUCLEAR SAFETY

First Deputy Chairman of the Verkhovna Rada Committee on Fuel and Energy Complex, Nuclear Policy and Nuclear Safety Oleksandr Dombrowskyi told that nuclear industry faced many issues requiring legislative support within a relevant committee. “I think that next week we will make a series of decisions and solve the issues hung up”, said O.Dombrovskyi.

Among the most urgent issues, the people’s deputy highlighted the case of the Energoatom’s doubtful debt collection in favor of Ukrelektrovat that caused blocking accounts of the Ukrainian NPP operator.  “Unfortunately, I can state that Draft Law No. 3097, where I was a co-author, on the moratorium (for debt collection) regarding Energoatom was not signed by the President. I hope that soon we will come to a new discussion, improve this Draft Law, once more consider it in the Parliament to address this issue at least in 2016 and to allow solving the system of payment defaults for Energoatom. Since it is a problem that unfortunately grows. Under 28 billion UAH of the Energorynok’s domestic debt, actually 12 billion UAH debt to Energoatom is a critical debt that cannot be solved in a minute or even a month”, said the people’s deputy.

In his turn, Chairman of the Subcommittee on Nuclear Energy and Nuclear Safety  of the Verkhovna Rada Committee on Fuel and Energy Complex, Nuclear Policy and Nuclear Safety Volodymyr Bandurov also agreed that the issue of debt collection from Energoatom should be solved as soon as possible. “We need to urgently put into force Law No. 3097 “On Amending Some Laws of Ukraine to Ensure Payments in the Fuel and Energy Complex regarding National Nuclear Energy Generating Company Energoatom”. This will normalize the economic activity of the company. We think that in the near future it is necessary to find a mechanism to protect the operator’s  accounts from unfair contractors”, highlighted the people’s deputy.

According to him, timely and proper funding of long-term operation for Ukrainian NPP units should be ensured. “Due to the safety improvement program for NPP units till 2020, which was approved in 2012, over 1200 measures are planned to maintain safe power unit state and ensure their long-term operation. By 2020, our country has a very difficult task: we need to ensure long-term operation for ten power units. At the same time, in some years long-term operation will be implemented at two units simultaneously, in particular, this year lifetime of ZNPP-1 and 2 will be extended. All this requires a huge mobilization of institutional, human and financial resources”, said V.Bandurov.

He noted that as of 1 January 2016, cost of the Comprehensive (Integrated) Safety Improvement Program for Ukrainian NPPs was over 30 billion UAH. “In the current year safety improvement measures and long-term operation of NPP units will require more than 4 billion UAH and only the third part of which is covered by tariff. In general, according to the forecast balance, the Energoatom’s tariff deficit this year will be over 14 billion UAH. To overcome this situation it is necessary to ensure fair tariff for nuclear power plants, it means to bring tariffs in compliance with the actual costs of electric power production. Especially it is important to establish a justified tariff considering implementation of a new power market model. We have prepared Draft Law No. 1394, which envisages inclusion of costs for safety improvement measures for nuclear facilities to NPP electric tariff approved by the National Commission for State Regulation in Energy Sector and Utilities. It means that not at its own discretion, not by subjective attributes but on a mandatory basis, measures planned by NPP operator as binding to improve safety of nuclear power units, should be included to the tariff”, highlighted V.Bandurov.

During the hearings, the President of Energoatom Yurii Nedashkovskyi noted that the implementation of projects strategically important for nuclear and industrial complex of Ukraine is slowed down by the absence of a general state strategy for industry development.

“Of course, the current energy strategy of Ukraine remains till 2030. It was approved in 2013, but the changes that took place after 2013 in social, economic and political situation of the country require urgent revision and updating of this strategy. Attempts of such updating were unsuccessfully made during 2014-2015. The same applies to the State Target Economic Program to Develop Nuclear Complex of Ukraine for 2016-2020 that is also currently not approved, but the previous program expired. Concern Nuclear Fuel, State Enterprise Eastern Mining and Processing Complex that mines uranium raw material, Enterprise Zirconium, our pipe production, they, unfortunately, does not have policy documents that would ensure their development. It should be understood that the investment cycles in nuclear power last for hundred years or more, so destiny of the future generations literally depends on quality of the decisions that we are taking, or not taking”, said the President of Energoatom.

He expressed regrets that under crisis conditions, the Ministry of Energy and Coal Industry of Ukraine was focused only on supervisory control of repair schedules for power plants and coal routes. “Our body left aside one of its key tasks defined in Article 21 of the Law of Ukraine “On Nuclear Energy Use and Radiation Safety”: planning, development and implementation of state programs for nuclear energy use”, added Yurii Nedashkovskyi.

In his view, the situation in nuclear industry requires urgent correction. “We hope that our proposals presented in the draft decision of the Verkhovna Rada Committee on Fuel and Energy Complex will be supported and strictly controlled by the deputies”,  said Yu. Nedashkovskyi.

Interview of Uatom.org Editorial Board with Viacheslav Orlov and Arkadii Uskov,... 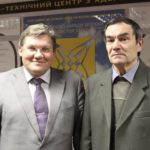