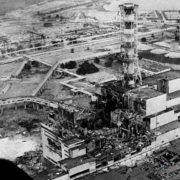 Lately, I often talk with reporters. They usually begin with a question: “When did you hear about the accident and what did you feel?” I do not like this question; I do not know what to say: the truth or what they expect me to say? The answer seems to lay on the surface: what except fear and terror you can feel learning about the largest man-made accident of the last century?

However, about the fact that on 26 April, a world-shaking event occurred, many people learned after more than one day and more than one week. At the moment of the accident, only the fact of its occurrence was known. The scale appeared gradually.

It is as if reddish-black blood slowly soaks the sheet covering someone’s body. We must have the courage to pick it up and see. Then you will be covered with pain and suffering experienced by the first who faced with an incredible and impossible thing Chernobyl accident.

On 26 April, I knew nothing, and there was nothing but uneasy feeling of the unknown. Only when it became known that the reactor was destroyed, Pripyat was evacuated, first exposed people were transferred to Moscow to the sixth clinic by a special flight, it became clear: something terrible occurred.  That could not happen ever, but happened because people let it happen, and the reactor allowed.

I did not like questions about today’s life of liquidators of the Chernobyl accident. Since in addition to pain, I do not feel anything. It is painful to live in a state that remembers them only in the years of commemoration, distributes prizes, commemorative medals, gives monetary compensation. As if it coaxes and apologizes for not having done this before and for not going to do this until the next commemoration. For those who will be alive.

The past 30 years have shown that not only the radioactive isotopes have half-life, but also our memory has. The only difference is that the isotope half-life is a constant value and half-life of the memory of Chernobyl is own, individual for each person.

The state has the shortest one.

Several years ago, I started to collect memories of the liquidators, who first came to work to the Shelter. Thus, book “Alive until in memory” was written. I heard and wrote many stories about studies of the destroyed unit, different versions of accident progression, its causes, elimination of accident consequences and about the future.

Most of all I liked the idea that when we begin to consider NPP as a something safe, it immediately becomes dangerous. Then, in 1986, the Soviet operator, managers and designers firmly believe that our Soviet reactor may not explode. Local accident: yes, maybe, but to explode to the extent when radioactive dust from the explosion spreads around the globe! No, it’s not about the Soviet reactor. However, it turned out that it may. Thus, the Shelter was constructed.

The Shelter has been and will remain dangerous for years to come. We cannot think that everything is under control. This is not so, because 30 years later, there is still no clear and unambiguous answers to many questions.

The Shelter is a temporary unorganized storage facility of radioactive waste. Unorganized means uncontrolled. At the same time, the main task of Shelter transformation into an ecologically safe system is to bring all inside to controlled state. Unfortunately, sliding and the subsequent operation of the new safe confinement are unlikely to solve this problem. In this regard, I am pessimist, that is, a well-informed optimist. The transformation problems will arise, as they say, in “full-length”.

I Hope to God, we will have wisdom and determination to solve them.

Worker of Chornobyl NPP (1988-2009), member of the Union of Journalists of Ukraine Oleksandr Kupnyi

STRATEGIC DEVELOPMENT OF NUCLEAR INDUSTRY IN UKRAINE – HEARINGS OF THE VERKHOVNA...