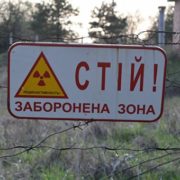 Recently, some politicians and mass media controlled by the Russian Federation exploit the topic on construction of a so-called nuclear “burial” in the exclusion zone.” Allegedly, near Kyiv it is planned to construct a deadly hazardous nuclear facility to which radioactive waste will be delivered from around the world.

“All these reports are undoubtedly fake”, SNRIU Chairman Serhii Bozhko commented. “Every year Ukraine spends about 150-200 mln. USD to transport spent nuclear fuel to the Russian Federation for storage and reprocessing. We can avoid this dependence through the construction of our own centralized spent fuel interim storage facility (centralized ISF). I would like to note that it will be a high-technology facility, and highest possible level of nuclear and radiation safety is the main criterion for its construction. At the same time, being undoubtedly aware of the abovementioned, Russian politicians, as well as the mass media, call centralized ISF just a burial”.

Spent nuclear fuel from other NPPs (Rivne, Khmelnitsky and South-Ukraine) is transported to Russia for storage and reprocessing. “Now negotiations are in progress between Energoatom and the Russian Federation to return to Ukraine spent nuclear fuel reprocessing products such as vitrified high-level radioactive waste from VVER-440 (RNPP-1, 2). Probably, since 2018 waste will start returning. This is successfully concealed by the Russian mass media”, SNRIU Chairman said. According to him, this is because temporary storage and reprocessing of spent nuclear fuel for Ukrainian NPPs is advantageous for Russia.

“As regards VVER-1000 spent nuclear fuel, the issue of its reprocessing is still to be solved. In Russia, there are no appropriate technologies so far. I think that after implementation of reprocessing technologies for VVER-1000 spent nuclear fuel, the situation with the return of vitrified high-level radioactive waste will be identical”, Serhii Bozhko noted.

Commenting on the construction of a centralized storage facility in Ukraine, the SNRIU Chairman informed that the use of centralized ISF is common international practice.

Note: According to the IAEA, the total number of spent nuclear fuel storage facilities is 153, 111 of them are “dry” and 42 are “wet”. It should be noted that seven such facilities are in Russia, six of them being “dry” and one being “wet”.

“Of course, Russia does not intend to disclose actual technical details, as it has other goals. In terms of information aggression, it is much better to scare the people of the country that experienced the Chernobyl disaster by horrors of the “nuclear burial”. A hybrid war is hybrid because it does not select the methods used”, added Serhii Bozhko.

In view of the abovementioned, the SNRIU invites representatives of non-indifferent mass media to  join the information campaign for resistance to Russian propaganda. Within the campaign, the Inspectorate will develop a series of explanatory and educational materials on nuclear safety in Ukraine.