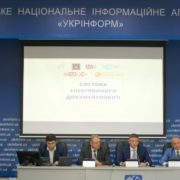 This was reported on 12 July during joint press briefing by Secretary of the National Reform Council, Deputy Head of the Presidential Administration of Ukraine Dmytro Shymkiv, Chairman of the State Nuclear Regulatory Inspectorate of Ukraine Serhii Bozhko and Director of the State Scientific and Technical Center for Nuclear and Radiation Safety Ihor Shevchenko. The key topic discussed by Mr. Shymkiv was implementation of the electronic document management system (EDMS) in Ukraine. The Secretary of the National Reform Council emphasized that electronic management sphere had advanced substantially over the two years. A series of projects were implemented.

“Over the two years, numerous projects have been implemented such as, for example, E-Data portal to monitor public finances. A portal of electronic petitions to the President has been launched and operates successfully. A ProZorro public procurement system has been launched. The citizens now have an opportunity to obtain biometric passports.  3G tender was conducted, and the state budget received 11 milliard UAH. An electronic system for free access to information on property rights and real estate has been created. Electronic apostille and other services that were previously available only through old bureaucratic paper-based procedure have been introduced. And this list if far from being complete” – added Deputy Head of the Presidential Administration of Ukraine.

EDMS was developed by staff of the Presidential Administration of Ukraine. The development was started in August 2014, and the system was put into trial operation on 1 February 2015.

Today more than 500 employees of the Presidential Administration use the system on an everyday basis. EDMS provides access to advanced analytics and reports to analyze business processes and made effective management decisions. During 2015, four full training cycles were conducted for 428 employees as a total.

Partnership between the State Scientific and Technical Center for Nuclear and Radiation Safety and the Presidential Administration began in March 2016, when the Administration announced free transfer of the system to state agencies and authorities.

“SSTC NRS was almost fully prepared for the introduction of electronic management system from both a technical and professional viewpoints. SSTC NRS’ hardware and software complied with technical requirements for EDMS installation, so there was no need for additional funding. The EMDS installation, testing, and adaptation process took about two months, one month being spent to eliminate drawbacks of our knowledge portal platform and one month directly to implement EDMS. The system has been in trial operation since the end of June” – informed Mr. Shevchenko.

“The decision to implement EDMS proposed by the Presidential Administration’s development team fits perfectly into our vision of future evolution of the knowledge management system. Hence, we commenced pilot implementation of EDMS at SSTC NRS. After EDMS trail operation, SSTC NRS experts will introduce the system at SNRIU” – informed SNRIU Chairman, Serhii Bozhko.

As of today, interest in EDMS has been expressed by 39 establishments, 18 ministries are analyzing EDMS implementation, 10 ministries are looking for funding, 21 institutions are in decision-making process, and 19 regional administrations and 22 municipal councils showed their interest as well.

“NUCLEAR BURIAL” NEAR KYIV OR HOW RADIOPHOBIA IS USED IN INFORMATION WA...

Radioactive blueberries on markets: how to protect yourself
Scroll to top