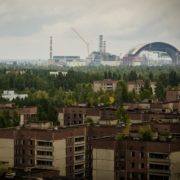 This information is intended to inform the public on implementation of projects aimed at overcoming consequences of the Chornobyl accident and on the main radiation nuclear facilities in the Exclusion Zone.

The Chornobyl area is the strict access territory intensively contaminated by radiation due to the accident at Chornobyl NPP. The legal regime of this area is defined in accordance with Law of Ukraine No. 791а-12. THE FOLLOWING FACILITIES ARE LOCATED IN THE EXCLUSION ZONE:

Main facilities in the Exclusion Zone for radioactive waste management:

Facilities to be constructed:

The construction of the Shelter above the destroyed fourth unit has protected the environment against release of radioactive substances and people, primarily those working at ChNPP site, against radiation. However, extremely short terms for construction in conditions of high radiation, use of remote methods, insufficient strength of remained structures in the fourth unit that became supports for Shelter building structures, significant amount of radioactive materials and fuel inside defined major risks and the need for their minimization.

On 12 March 2001, the Intergovernmental Commission on Comprehensive Solution of ChNPP Problems approved the Strategy for Transformation of the Shelter into the Environmentally Safe System, which will be implemented in three stages. The first stage is to stabilize building structures of the Shelter; the second stage is to construct the New Safe Confinement; the third stage is to transform the area into the environmentally safe system.

Stabilization of building structures was gradually carried out from 1998 to 2008. The construction of the New Safe Confinement has started in April 2012 and is still underway. NSC is planned to be finished in November 2016 and the Arch will be placed in its design position above the Shelter. In November 2017, the New Safe confinement shall be commissioned. However, the activities shall not stop while moving the Arch above the Shelter. The next final stage shall include creation of the infrastructure for dismantling of unstable structures in the Shelter, removing of fuel-containing materials and radioactive waste for further management, including disposal.

Large amount of solid and liquid radioactive waste with different activity level was accumulated at Chornobyl NPP during its operation and in the elimination of accident consequences in 1986. Within international technical assistance projects, Liquid Radioactive Waste Treatment Plant and Industrial Complex for Solid Radioactive Waste Management were constructed and are under commissioning. These facilities will allow treatment, conditioning of accumulated and generated radioactive waste.

Facilities in the Exclusion Zone:

The Vector site is located in the Exclusion Zone at the 11 km distance south-west from Chornobyl NPP.

The Vector Complex is a complex of facilities on decontamination, transport and disposal of radioactive waste. The complex construction started in 1998. The construction process consists of two stages:

In 2015, the efforts were completed on the construction of the Centralized Long-Term Storage Facility for Radiation Sources at the Vector site, mounting of its systems and equipment.

RWDS Buriakivka has been under operation since. The disposal site consists of thirty near-surface trenches for radioactive waste disposal. Approximately 687,000 m3 of Chornobyl origin radioactive waste have been stored in RWDS Buriakivka since the beginning of its operation. At present, possible reconstruction of the facility is considered due to exhaustion of RWDS design life.

Facilities to be constructed:

Radioactive blueberries on markets: how to protect yourself 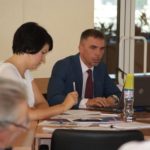 On 15 July, the SNRIU Board approved the draft Seventh National Report “On...
Scroll to top