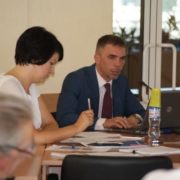 It should be recalled that Ukraine signed the Convention on Nuclear Safety on 20 September 1994 and ratified it by the Law of Ukraine “On Ratification of the Convention on Nuclear Safety” No. 736/97-VR dated 17 December 1997 with a declaration. Since that time, every three years Ukraine reports to the international community on the safety of its nuclear facilities and safety improvement measures.

“Today I have the honor to present the draft National Report to the public. Its general objective is to provide reliable and unbiased information on safety of nuclear power plants and measures implemented to protect the public and the environment in Ukraine”, said Roman Khalenko, Head of SNRIU Operational Safety Department.

He told that after approval of the final revision of the report, it should be translated into English and sent to the Secretariat of the Convention to 12 August to be published on a closed IAEA website. By 13 February 2017, the Parties to the Convention will review the National Reports of Ukraine and other member states on the mentioned website.

The Seventh Meeting of the Parties to the Convention will be held on 27 March-07 April 2017. The official delegation of Ukraine will present the National Report on Compliance with Obligations under the Convention in Vienna.

The draft Report was approved by the SNRIU Board at end of the meeting.

Chornobyl NPP Exclusion Zone can be Restored to Become the Largest Solar Energy...
Scroll to top