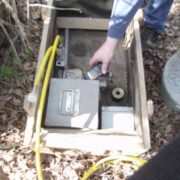 The State Nuclear Regulatory Inspectorate of Ukraine and other ministries, institutions and organizations of Ukraine continue implementation of measures aimed at detection of illicit trafficking of radioactive materials, their withdrawal and corresponding safe storage.

In April 2016, a round shape container with radiation warning signs was revealed in Vasylivka, Sumy Oblast, near the railway line. According to the survey conducted by Sumy Regional Laboratory Center of the State Health and Safety Service of Ukraine, it was found that the metal object is a protective container with depleted uranium for charging and recharging hose gamma flow detector “Hammaryd”. One more gamma flow detector “Hammaryd” 170/400 was found in April 2016 in forest of Kryvyi Rih, Dnipropetrovsk Oblast. Hazardous devices were transferred to Radon state specialized plants for further storage. During the first quarter of 2016, there have been cases of withdrawal from illicit trafficking of radioactively contaminated scrap metal at the metallurgical enterprises of Ukraine. The Directorate of Ukrposhta mail processing and transfer in Kyiv withdrew mails whose equivalent dose rate (gamma radiation) exceeded reference levels approved by the Chief State Physician of Kyiv. Withdrawn watches, compasses and other items were transferred for storage to Kyiv State Interregional Specialized Plant of UkrDO Radon.

Chornobyl NPP Looks for Ways to Save Energy
Scroll to top