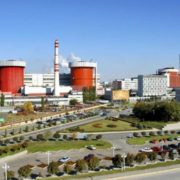 On 17 August, SUNPP experts together with representatives of the National Guard military unit responsible for protection and defence of NPP facilities, representatives of the SNRIU, SSU, law enforcement and prosecution authorities of Yuzhnoukrainsk discussed the issues on the increase of SUNPP security and enhancement of interaction between law enforcement authorities, SSU and all anti-terrorist protection entities.

Physical protection of the high-security Yuzhnoukrainsk Energy Complex including NPP, HEPP and PSPP is very important in view of setting of the “yellow (potential threat)” level of the terrorist threat for Mykolaiv Oblast. The Anti-Terrorist Center at the Security Service of Ukraine set this level in view of escalation of conflict at the administrative border with Crimea and in the Anti-Terrorist Operation Zone. In compliance with Cabinet Resolution No. 92 dated 18 February 2016, such a level is set based on the reliable (confirmed) information on preparation of the terrorist act.

According to Ivan Zhebet, Deputy Director General of SUNPP, implemented and planned measures on the increase of security of NPP, HEPP and PSPP were discussed during the meeting held on 17 August. “I want to underline that National Guard military unit responsible for NPP protection is in high alert. During regular training and drills, the special military unit exercises facility defence including anti-terrorist protection. One of these drills took place on 17 August. Energy Complex personnel is also involved in implementation of measures on the prevention of terrorist acts. Each employee of NPP is informed by recommendation memo of the Anti-Terrorist Center of Ukraine on the primary actions in case of terrorist act or sabotage”, said Ivan Zhebet.

Training of National Guard management personnel organized by the George Kuzmycz Training Center for Physical Protection, Control and Accounting of Nuclear Material, and cyber security training that is currently conducted at SUNPP site under U.S. DOE auspices are aimed at the increase of SUNPP security and protection of SUNPP facilities.

Chornobyl NPP Looks for Ways to Save Energy