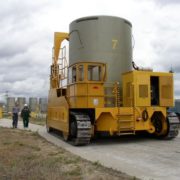 On 24 August 2001, the first ventilated concrete cask loaded with spent fuel was placed into the Dry Spent Fuel Storage Facility (DSF) at ZNPP site. This happened at 23:55 as power engineers worked hard for DSF to be put in operation on the Independence Day of Ukraine. The official DSF history started at this moment owing to ZNPP power engineers. From the very beginning and up to present, the implementation of this project has involved experts of various ZNPP subdivisions. The Nuclear Safety Department is a mastermind and coordinator of this work. Starting from 1995, Anna Luchna heads the Nuclear Fuel Storage Service. We met her the day before the anniversary.

In 1993 Ukraine faced the problem of further storage of spent fuel when, after USSR breakup, the spent fuel removal to Russia stopped. Based on predictive assessments, the most challenging situation involving power unit shutdown occurred at ZNPP. Just then, ZNPP experts took the responsibility to find alternative variants of spent fuel storage. As a result, ZNPP became first among Ukrainian and CIS NPPs that built a dry storage facility for WWER-1000 spent fuel. Thus, the problem of spent fuel storage at ZNPP was solved for the nearest 50 years and the country saved great funds.

In selection of the storage type, the project of Duke Engineering & Services (DE&S) together with Sierra Nuclear Corporation (SNC), licensed by the US NRC, was recognized as most acceptable one. In 1996, ZNPP started the implementation of the dry spent fuel storage facility project.

– Currently, the spent fuel removal to DSF is routine and streamlined work. ZNPP personnel gained great experience. The nuclear engineers have all necessary set of developed documentation. The innovators transfer the experience, share their knowledge and improve the design. However, at the beginning of this process everything was not as nowadays because everything was for the first time, – recalls Anna Luchna.

We had to start from scratch: from the international experience study and analysis, cooperation with many research organizations, development of technologies and implementation of new ideas. Sometimes we doubted: is it possible to implement these ideas or not. But we never stopped in searching for better decisions.

This period was characterized by the introduction of new laws but there were no implementation mechanisms. That is why ZNPP nuclear engineers developed new documents being guided by international regulations. After that, the documents were approved, reviewed and agreed with the SNRIU. Each such agreement was an important breakthrough. Approximately 300 documents were reviewed.

For project adaptation and adjustment of technology, it was necessary to perform the great scope of work at power units, including reconstruction work. The pre-commissioning took place at all units in order to have confidence in the possibility of all handling operations. Different ZNPP structural subdivisions were involved in this process. Pre-commissioning was carried out using a cask simulator, manufactured by the Construction Department, which met the parameters of the original.

Also, simulators of the multi-assembly sealed basket, used by the Power Repair Service personnel to test the welding technology developed by the Paton Institute of Electric Welding, were manufactured by the Non-standard Equipment and Piping Production Plant (NEPPP). The Metal Control Service had to master the vacuum dehydration system.

The DSF components and equipment passed the voluntary certification stage. The construction of the storage site was supervised by the State Center for Quality Regulation of Supplies and Services.

The spent fuel storage site is designed for the storage of 380 casks. Currently 137 casks are stored in DSF. The manufacture a ventilated storage cask takes 45 days. The casts are assembled and concreted by ZNPP constructors. They also constructed the storage site, vehicle roads along the power units and cast production site. The Non-standard Equipment and Piping Production Plant produces multi-assembly  sealed baskets and absorbers used to ensure nuclear safety.

In general, all DSF components are of local manufacture.

The ZNPP submits quarterly reports to the SNRIU. The results of radiation monitoring of the well water, wastewater, precipitations and air demonstrate that the content of radionuclides in DSF siting area meets the natural background.

The DSF safety was reassessed twice over its operational period. The second safety reassessment was completed in this month with conclusions. Besides, additional safety reassessment of ZNPP power units, including DSF, was carried out after the accident at Fukushima-1 NPP.

We can see that our nuclear engineers have much work in spite of the fact that DSF construction project was implemented long time ago. New trends show up and standards are developed. The ZNPP experts take the initiative and responsibility in the same way as before. Current ZNPP experience is used in implementation of the centralized storage facility project.

The DSF construction at ZNPP is the most ambitious and unique project in the power industry history of independent Ukraine as regards spent fuel management. Currently Ukraine develops spent fuel management concept and, as the time showed, DSF project implementation turned out to be not only justified but also strategically wise and important step. Spent fuel storage in DSF costs at least 10 times lower than spent fuel removal to Russia for temporary storage. The DSF is a constituent part of economic and political independence of Ukraine. The results of DSF operation confirm its safety and reliability.