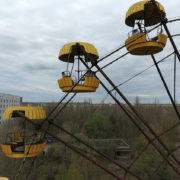 The State Agency of Ukraine on Exclusion Zone Management is developing a project for construction of solar power plants in the Chornobyl Zone within the 10 km NPP zone on an area of 2.5 thousand hectares. According to the presentations, it is planned to construct solar power plants in the 10 km zone southwards of the Chornobyl NPP. Areas near roads and power lines are being prepared for construction. Solar radiation on the territory is 1.300 kWh per square meter.

According to the Agency, full implementation of the project may allow production of about 1.5 GWh of electric power per year, which will generate about 120-130 million income annually by 2030. Cheap land lease and availability of necessary infrastructure are specified among the advantages of plant construction in the Exclusion Zone.

“The project is under development and extension. A wide range of national and foreign investors are invited to the project”, said in the State Agency. In 2014, Vipiemme Solar SRL Company after signing the memorandum with the Ministry of Ecology had intentions to install solar panels with a capacity to 0.5 MW in the Exclusion Zone, but the project was never implemented.

In April of this year, head of the State Agency of Ukraine on Exclusion Zone Management Vitalii Petruk said that all intentions to construct solar power plants in the Chornobyl Zone were not implemented because of not regulated allocation of land in legislation. This problem was solved with the adoption of the draft law on establishing Chornobyl radiation and ecological biosphere reserve in the Exclusion Zone. The document was signed by the President of Ukraine on 26 April 2016.

At the end of August, the State Agency on Zone Management announced the intention to lease out 3.38 hectares of land for 49 years to construct solar power plants. The cost of leased property excluding VAT will be 6.2 million UAH.

“Nuclear fuel is not fuel from gas station: you cannot go to another station...
Scroll to top