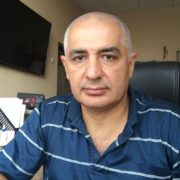 Most recently, Ukraine saw a high-profile event: nuclear fuel produced by Westinghouse Company was loaded at Zaporizhzhya NPP Unit 5. After completion of major scheduled outage, the unit was connected to the grid. The event caused a great interest among the public. We talked about the advantages of diversification, history of Westinghouse fuel implementation in Ukraine, differences between American and Russian fuel with the chief engineer of the Reactor Core Design Center of Scientific and Technical Establishment “Nuclear Fuel Cycle”, Kharkiv Institute of Physics and Technology, Akif Abdullayev.

Reference. The Reactor Core Design Center of Scientific and Technical Establishment “Nuclear Fuel Cycle”, Kharkiv Institute of Physics and Technology was established in 1999 within the Project of Nuclear Fuel Qualification for Ukraine in compliance with the executive agreement between the governments of Ukraine and the USA. One of the main activity area of the Center is scientific support of nuclear fuel implementation at Ukrainian NPPs. – Akif, why nuclear fuel diversification is so important for our country?

– Diversification is important for two reasons. The first is to have an alternative nuclear fuel supplier. The second is to improve nuclear fuel quality through competition. The proportion of electric power generated in Ukraine is over 50%. We run the risk of losing it in case of problems with nuclear fuel supplies due to various reasons, such as man-made accidents or political force majeure. The development of this area and its control are strategically important for energy security as a component of national security of Ukraine.

– Why Westinghouse? Is it possible to cooperate with other companies in this area?

– Nuclear fuel is not fuel from a gas station: you cannot go to another station if it is closed or you do not like it. Production of nuclear fuel requires technologies. Resources are also needed for design, support of scientific and technical framework, development and testing of construction materials and fuel components, confirmation of technical decisions, licensing, etc.

Why Westinghouse? The fact is that Westinghouse fuel design for VVER-1000 was developed in the 90s in designing fuel for Czech Temelin NPP. For a long time, fuel market for the reactors of the Soviet type was closed, so it was not interesting for the majority of western fuel suppliers. Only Russia produced fuel for these reactors.

The most important difference of the western fuel from the Soviet one is in design, in particular in geometry. Generally, all Western commercial reactors use fuel with square geometry, Russian ones use a hexagonal geometry. Fuel adaptation requires developing and modifying computer codes and new testing methodologies, performing a large amount of design activities and solving process issues. Considerable financial and time resources are needed for this.

Therefore, to answer your question, I should say that Ukraine may cooperate with other companies producing nuclear fuel. However, without additional financial costs it is impossible to obtain alternative fuel. With the Westinghouse Company this step was performed, fuel samples were already adapted and operated. This was determined by history, there is no politics.

– The process of nuclear fuel diversification in our country started in 1999 with signing the intergovernmental agreement between Ukraine and the United States. According to the agreement, the U.S. party undertook to provide Ukraine with financial and technical assistance in establishing an independent unit, which should be engaged in the assessment of alternative fuel suppliers.

At the beginning of the diversification project, it was planned to load six test assemblies by Westinghouse, at the final stage – to load 42 assemblies of the reloading batch to one of the Ukrainian NPP reactors.

Since 2000 to 2005, designing was underway. Finally, in 2005 the first six assemblies by Westinghouse were loaded to the core of South-Ukraine NPP Unit 3. They operated without any comments for four years of the design lifetime. In 2010, operation of the reloading batch consisting of 42 assemblies was launched. The qualification project was completed in 2014 with unloading of Westinghouse assemblies that were in operation for four years from the reactor core. Currently, Westinghouse fuel is supplied on a commercial basis.

– Westinghouse fuel was initially designed for common use in the so-called “mixed cores” with Russian fuel operated at SUNPP Unit 3 at that time. In 2009, implementation of improved design of TVEL fuel was started: FA-A. This changed conditions for operation of Russian and U.S. fuel. It was necessary also to improve Westinghouse fuel, which was not performed.

In 2012, visual inspection of Westinghouse fuel revealed damaged components in the structure of assembly, spacer grids that interact with neighboring assemblies and reactor internals. Damage occurred during transport operations, assembling and disassembling of the reactor core. Damage of fuel rod did not occur, so there was no radiation release. From safety viewpoint, it is difficult to call the situation in 2012 critical. However, damage of spacer grids could subsequently lead to further degradation of assembly structure and damage of fuel rods.

– Were there any problems in Ukraine with operation of TVEL nuclear fuel?

– Similar problems have been observed previously, problems also were with the curvature of Russian assemblies. However, they were removed by the Designer. Nuclear fuel is operated in sufficiently hard radiation fields and temperature conditions, so fuel design is constantly being improved according to the accumulation of operational experience to improve the quality.

– How the problem was solved in 2012 in Westinghouse?

– According to the results of damage investigation, a commission formed by the operating organization with representatives of the regulatory body of Ukraine, recommended Westinghouse to improve assembly design that was done. The main design modification was related to the design of spacer grids, which was strengthened.

– What is the probability that the situation of 2012 will be repeated?

– The probability is very low. Today, we may state that modifications performed by Westinghouse and administrative measures at NPP allow exclusion of this problem.

– Today, Westinghouse fuel is operated at 2 of 15 Ukrainian power units. Vice-President of Westinghouse Aziz Dag says that the company may fully provide Ukraine with nuclear fuel. There are enough capacities for VVER-1000, development of fuel for VVER-440 is underway. At what stage Ukraine should say “stop” to the United States? After all, the main thing in diversification is to keep balance.

– In this situation, a reasonable compromise is needed. Ukraine should not enter total Swedish or American dependence instead of total Russian dependence. If you do not take into account the political component, 50% to 50%, perhaps is the most acceptable option. As far as I know, Energoatom has the same plans.

– Is it possible to use Westinghouse fuel in load following mode and power uprate?

– Technical specifications of Westinghouse fuel for 2005 specified that fuel was designed for the use in load following modes. This fuel is operated today at French nuclear power plants under the load following mode. The thermal margin allows its operation under increased reactor power.

– Are characteristics the same regarding TVEL fuel?

– As far as I know, TVEL tests fuel operation under the load following mode. With regard to power increase, TVEL has such experience at power units with its fuel.

– Recently, politicians and mass media of the Russian Federation make many statements that Westinghouse fuel is not suitable for Ukraine due to technical characteristics.

– In this case, it is politics and propaganda. The truth lies in the fact that Russia does not want to lose a substantial part of the market.

– In my opinion, this question has two sides: economic and investment in the future. As far as I know, for economically justified nuclear fuel production plant, Ukraine should have at least 20 power units assuming that fuel will be produced only for own needs. On the other hand, if Ukraine wants and desires to become a technologically advanced country not only the consumer but also the developer of technologies in nuclear industry, such a plant would in every way contribute to this. Development of nuclear science and industry, scientific, engineering, experimental, design, and process background would receive new impetus. Who knows, maybe one day exactly Ukrainian fuel would compete with Russian or American fuel in the world. I personally believe that Ukraine needs a nuclear fuel production plant.

– Akif, what future do you see for our country in this area?

Membership of Ukraine in Euratom Research and Training Program (2014-2018):...
Scroll to top