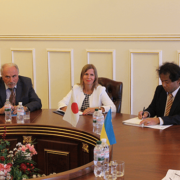 On 7 September 2016, Vice President of the National Academy of Sciences of Ukraine A. Zahorodnii met Fukushima University Delegation (Japan) at the premises of NAS Presidium.

Japan was represented by Professor K. Nanba, Director of the Institute of Environmental Radioactivity (IER), and M. Zheleznyak, Professor of the Fukushima University.

Having welcomed the honored guests, A. Zahorodnii briefly informed on the status, main tasks and the most significant achievements of the Academy. The scientist also noted that scientific institutions of the NAS of Ukraine are interested in close cooperation with Japanese partners, in particular within SATREPS Project (Japanese State Program “Science and Technology Research Partnership for Sustainable Development”).

SATREPS Program is financed and managed by two governmental agencies: Japan Science and Technology Agency (JST), which finances the activities of Japanese organizations within SATREPS Project, and Japan International Cooperation Agency (JICA), which particularly finances technical assistance to Ukrainian scientific institutions within the Projects and activities of Japanese partners in Ukraine.

Earlier, in fulfillment of the Agreement on Technical Cooperation and Grant Assistance between the Government of Ukraine and the Government of Japan dated 10 June 2004, the Ministry of Economic Development and Trade of Ukraine sent an application to participate in SATREPS Program with the Project “Improvement of Radiation Monitoring of the Environment and Legislative Framework of Ukraine for Environmental Remediation of Radioactively Contaminated Sites”.

The scientists hope that the Project “Improvement of Radiation Monitoring of the Environment and Legislative Framework of Ukraine for Environmental Remediation of Radioactively Contaminated Sites” will strengthen the technical level of radiation monitoring and improve the legislative framework in Ukraine for efficient environmental remediation of radioactively contaminated territories, will ensure monitoring and modeling for new zoning of Chornobyl Exclusion Zone, will help to receive new knowledge on long-term behavior of radionuclides in the environment and to assess efficiency of technologies on environmental remediation through the comparison of research efforts in Chornobyl and Fukushima.

In May 2016, the Project with planned budget of 100 million yen (almost 1 million USD) per year received pre-financing of SATREPS Program. It is important that JICA financing can be used by the Ukrainian party to improve technical equipment of scientific institutions of the Academy and holding of joint scientific and technical events in Ukraine and Japan.

The parties agreed to continue preparation and agreement of two contractual documents in order to implement the Project: Collaborative Research Agreement (CRA) / Memorandum of Understanding (MOU) that includes detailed research plan, and Records of Discussions (R/D) that is the document defining technical assistance to Ukraine and the plan of scientific and technical measures. Signing of the stated documents is planned for November 2016.

In conclusion, Academician A. Zahorodnii and Professor K. Nanba summed up the discussion, outlined the promising areas of bilateral cooperation and expressed confidence in the need for further Ukrainian and Japanese scientific and technical cooperation.