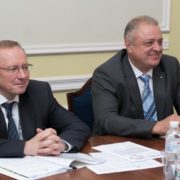 The Board of the State Nuclear Regulatory Inspectorate of Ukraine allowed long-term operation of Zaporizhzhya NPP Unit 1. The event was held on 13 September 2016 in the office of the Verkhovna Rada Committee on Fuel and Energy Complex, Nuclear Policy and Nuclear Safety.

Chairman of the State Nuclear Regulatory Inspectorate of Ukraine Serhii Bozhko opened the meeting of the Board: “Long-term operation is a worldwide practice. Ukraine has successful experience in this area: long-term operation was authorized at four units of Rivne and South-Ukraine NPPs. Today we consider the possibility of ZNPP-1 long-term operation”. President of Energoatom Company, Yurii Nedashkovskyi, joined the discussion. He said that the ZNPP-1 design lifetime expired. Energoatom Company performed a full range of engineering and upgrading activities to assess the technical condition of equipment, improve and review safety and replace equipment with expired service life.

“Problems occurred during upgrading: more than half a year we worked with blocked accounts, there were delays in the last scheduled major outage, difficulties also were encountered in restoring operability of diesel generators. Nevertheless, today we have overcome all difficulties. ZNPP-1 is ready for long-term operation. Not the least in this process was cooperation between the regulator and the operating organization”, assured Yurii Nedashkovskyi.

After the speeches of the Board, Deputy Director on Nuclear Installation Safety of the State Scientific and Technical Center for Nuclear and Radiation Safety, Vyacheslav Boychuk, presented results of the state review on nuclear and radiation safety of the Periodic Safety Review Report for ZNPP-1. After that, Deputy Director of the Directorate on Nuclear Facilities Safety of the Nuclear Regulatory Inspectorate, Valerii Buhai, confirmed that according to the results of inspections, ZNPP-1 had all conditions for long-term operation.

From the public, speech of Valentyn Kupnyi, a member of the Public Council under the SNRIU, was the most high profile. According to him, personnel of ZNPP-1, Energoatom and the SNRIU should conduct a public information campaign for population of Nikopol with a detailed explanation of true causes of so high morbidity in the region. According to Valentyn Kupnyi, the cause of diseases is in Zaporizhzhya hydroelectric power plant and not in Zaporizhzhya nuclear power plant.

At the end of the event, the First Deputy of the Verkhovna Rada Committee on Fuel and Energy Complex, Nuclear Policy and Nuclear Safety, Oleksandr Dombrovskyi, took the floor. He stressed that ZNPP-1 long-term operation was strategically important for Ukraine. Nevertheless, he also noted drawbacks in the arrangement of this process.

Twelve present members of the SNRIU Board voted for ZNPP-1 long-term operation. ZNPP-1 lifetime was extended by 23 December 2025. 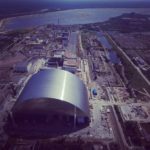