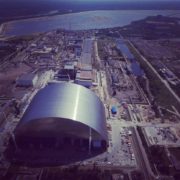 The construction of the New Safe Confinement (the Arch) at Chernobyl NPP is at the final phase of the second stage of Shelter transformation into an ecologically safe system. It is planned that Arch sliding on will be performed on 29 November 2016 with the participation of Chernobyl Shelter Fund (CSF) donors.

The New Safe Confinement (NSC) is the largest movable structure in the world, which will be equipped with unique technologies and systems. The height of the Arch is 110 m, length is 150 m, width is 260 m and weight is more than 31 thousand tons.

According to the project, the Arch is constructed at a distance of 250 meters from the sarcophagus. This way will be “passed” during its sliding on.

“Completion of Arch sliding on the Shelter will show the successful implementation of the large-scale project in the field of radiation safety, which joins together 28 countries, and the beginning of Shelter transformation into an ecologically safe system”, said Head of the State Agency of Ukraine on Exclusion Zone Management Vitalii Petruk.

In November 2017, it is planned to commission the object and start dismounting of not stable structures. The project envisages that the new structure will be operated for 100 years.

The Action Plan for 29 November 2016 will be announced additionally.

Construction of Centralized SFSF: Problems and Prospects
Scroll to top