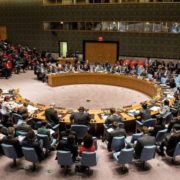 The UN Security Council adopted a resolution appealing to all states immediately to join the Comprehensive Test Ban Treaty (CTBT). Council members appealed with a special request to eight states on which treaty entry into force depends.

“The UN Security Council strongly urges all the states that have not signed or ratified yet the Treaty, especially the remaining eight states to do this without delay”, is stated in a unanimously adopted resolution.

It is noted that presently, the CTBT was signed by 183 states. 164 countries have ratified the document. However, for its entry into force, it should be ratified by 44 countries with nuclear capabilities. Meanwhile, 36 states from “the list of 44” have done it. Now the matter depends on eight countries: China, USA, Egypt, Israel, India, Iran, Pakistan, and North Korea.

The UN Security Council declared for the earliest entry into force of the Agreement. In its resolution, the Council members recommended all states to refrain from nuclear weapon test explosions or any other nuclear explosions. They expressed gratitude to the countries that have introduced national moratoriums on nuclear testing before its entry into force.

The Council Members recalled that five states possessing nuclear weapons (Great Britain, China, Russia, France, and USA) gave security guarantees to countries that do not have such arsenals. The Council today confirmed that such guarantees strengthen the non-proliferation regime.

The Council members noted the effective work of the Temporary Technical Secretariat of the CTBT, in particular, its ability to conduct seismological observations.

International Efforts to Overcome Consequences of Chernobyl Accident to Be ...

UNDER CHORNOBYL SUN
Scroll to top