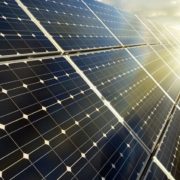 Ukrainian government seriously got down to the issue of alternative energy sources. Suffered Chornobyl was chosen to be the center for new safe type of energy. The largest solar power plant in Europe is planned to be constructed there.

As planned by the Ministry of Ecology, the project will revive Chornobyl, will make it profitable, full-fledged Ukrainian city. The Korrespondent figured out whether Ukraine will manage to become energy independent, obtain the status of the largest producer of safe energy in Europe and breathe new life into the abandoned city.

The idea of building solar power plants came to Ostap Semerak, current Minister of Ecology, for some reason, since it will help to revive the abandoned city and help the state at least partially to get rid of gas dependence.

“Over the past 30 years, the Exclusion Zone has become much safer. Since the tragedy, the radiation level reduced 10 thousand times. This means that we have to change our attitude to the Exclusion Zone and recover it”, said Semerak.

Uninhabited territories of Chornobyl do not look abandoned and inaccessible. There is very beautiful nature, clean streets, whitewashed curbs and friendly inhabitants, who are power plant personnel and squatters.

However, Chornobyl residents are pessimistic about the project. Some believe that all will end at the level of conversations, the other think that even if solar energy plants are build, this will not bring the city to life. After all, the personnel live here during the shift. Conditions are not too favorable for permanent living. Some Chornobyl citizens, who suffered from the tragedy of 1986, have the general fear that solar plants would be another dangerous facilities.

The Ministry of Ecology noted that it will not be possible to restore a full life in the city, and the rumor that the 30-kilometer zone during the construction will be reduced up to 10-kilometer zone was not confirmed.

“The answer is clear. The status of the Exclusion Zone defined by the law does not envisage staying of population on its territory. Prospects for return of people in the near future are small. The boundaries of the territory remain unchanged”, said Vitalii Petruk, Head of the State Agency on Exclusion Zone Management.

Nevertheless, we decided to make the project major. Since the territory and infrastructure make it possible, it was decided to build the largest solar energy fleet in Europe. We are confident that there will be no problem with the money, because two largest investment companies in the USA, four Canadian energy concerns, Chinese, German and Ukrainian investors are showing interest to the project.

“Canadian investors with interest consider the possibility for construction of biofuel plants and electric power plants on the territory of Chornobyl area. Canadian businessmen made a few real proposals regarding the possible construction. There are about six thousand hectares of unused land in ChNPP area, part of which can be used for placing of electricity generation facilities”, continued the Minister.

The Ministry of Ecology plans to install first 4 MW solar panels in Chornobyl by the end of the year. In the long term the plant will generate one thousand MW (ChNPP capacity was of about 4 thousand MW) and will become the largest in Europe. The construction will cost 1.5-1.8 billion USD.

Why are the investors so interested in building an electric power plant in the Exclusion Zone? Indeed, this is not the south where green energy could be accumulated faster. Kherson Oblast is the sunniest of all Ukrainian regions with the number of clear days that reaches 240 per year. There are significantly less clear days in Chornobyl. However, Chornobyl is now even more interesting.

The main advantage is the lowest cost for the construction and maintenance of solar power plants. The Ministry of Ecology lists all that attracts the investors to the Exclusion Zone: high-voltage lines remained after NPP can be switched to solar power facilities; there are powerful transformer substations; cheap land and large empty areas (most of solar energy cost regards land lease); experienced staff who can handle complex equipment. The Exclusion Zone administration has its own interest:

“As you know, one of the directions of Exclusion Zone development is the transition from unprofitable maintenance to profitable use. Therefore, the construction of solar power plants is the most appropriate for this territory. In addition, we have the opportunity to place solar energy fleet as close as possible to the existing powerful supply network”, explained Vitalii Petruk.

“The infrastructure of the Exclusion Zone allows launching the solar energy industry. It was planned to construct 12 power units at Chornobyl NPP, but only four were built. However, the infrastructure planned for such a tremendous amount of energy remained, and we have to spend money from the state budget for its maintenance for many years. Therefore, we are studying the possibility of using Chornobyl NPP infrastructure for solar energy generation”, commented Ostap Semerak.

Not very sunny Germany is a world leader in renewable energy production and it produces 39 GW a year covering a large part of its needs. Despite high cost of equipment, the Germans started to install solar panels on the roofs of their houses and abandon traditional fuel types in favor of the sun. We have significantly more clear days (by 20%) and the prospects for solar generation are fantastic! Experts believe that Ukraine has all chances to enter the top ten world leaders in solar energy generation.

In 2016-2017, Ukrainian and foreign developers plan to construct 34(!) new solar power plants in Ukraine with total capacity of 12 MW, despite the fact that only three were built in 2015. One shall not forget that this will provide jobs for Ukrainians. For example, more than 350 thousand people are involved into maintaining solar fleets in Germany.

According to rough estimates, the solar energy, which annually goes to the territory of Ukraine, is measured at 1.2 MW hours per square meter, and possible potential of Ukraine in solar generation is approximately 4 GW. France, which occupies the seventh place in the list of world leaders on solar energy use, receives the same amount of green energy.

The decision was made to move in this direction, since this opportunity is attractive to the country from all angles. It was decided to start from Chornobyl solar fleet.

“There is a document, the Energy Strategy of Ukraine until 2030, which determines that the use of renewable energy is a necessary factory in improving energy safety level and reducing anthropogenic impact of the power industry of the environment. Among others, this measure is of a serious international importance with regard to countering global climate change, improving of general state of energy safety in Europe”, said Vitalii Petruk.

The Ministry of Ecology has all the powers, since the time the Verkhovna Rada approved bill No. 4437, which allows using 6 thousand hectares of Exclusion Zone territory out of available 260 thousand hectares.

Besides, the law allows using the lands for solar power plants and for the cultivation of energy crops. It also gives the opportunity to develop infrastructure in the area and to place research centers and laboratories there. The remaining major area unsuitable for industry is intended for creation of a unique reserve.

The construction of solar power plant in Chornobyl interested the foreign media. They send a lot of requests to the Ministry of Ecology, according to the press-service. The whole world is excited by the possible restoration of the abandoned city.

“Certain types of activities in the Exclusion Zone did not stop even in the first years, but over time, the priorities have changed. Currently, the main tasks are to maintain environmental safety of the territory and implementation of projects at ChNPP site. In the future, implementation of the mentioned investment projects in parallel with the development of a reserve will help considerably to revive the activities in the Exclusion Zone”, said Vitalii Petruk.

Although, this is the major project, the Ministry of Ecology is not going to dwell on it, since it has ambitious plans.

SUN INSTEAD OF GAS

Every year, in September and October, Ukrainians think about the gas from Russia and the prospect of meeting the cold season with switched off radiators, because we are 70% dependent on imported oil and gas. We have plenty of sunny days in Ukraine, so the development of solar energy would be of a great help for us.

“Everyone understands that there are not so much sunny days in Chornobyl compared to southern Ukraine. However, the purpose of our ideas and proposals is to use those lands, so that the Exclusion Zone to become a full-fledged part of Ukraine. Moreover, this is a gradual shift to alternative energy sources. We need this to minimize the purchase of gas”, explained the press service of the Ministry of Ecology.

A recent trip of Ostap Semerak to the USA confirmed the desire of Ukrainian government to gain energy independence. Our Minister explained the essence of the conversation with Amos Hochstein, Coordinator for International Energy Affairs, in short: “We discussed the prospects for Ukrainian energy independence and development of solar fleets in Chornobyl, and not only there”.

Ukraine has corresponding obligation to the EU, which envisages replacing of traditional fuel types for renewable energy till 2020 (solar and wind power plants) in the amount of 11% of total consumption. The ratio of 87% of green energy to 13% of standard power is now in Germany.

“These important steps to reform our energy and switch to renewable energy sources confirm the orientation of Ukraine to energy independence and security”, confirmed Semerak.

The first industrial solar power plant in Ukraine was launched six years ago, but since then the country has reached the level of green energy development of 200 MW. Cancellation of customs duty and VAT on equipment made it possible to develop rapidly this area.

World-class experts claim that solar energy will become the “oil of XXI century” and according to their preliminary estimates, our solar power plant will become the largest power source in the world by 2070, exceeding several times the share of the oil and nuclear industries.