The events in the East and South of Ukraine have challenged the system of nuclear and radiation safety. The State Nuclear Regulatory Inspectorate of Ukraine lost regulatory control over nuclear power facilities located in the territories beyond the control of Ukraine: in the Donets’k and Luhans’k regions and in the Autonomous Republic of Crimea.

“Until recently, state regulation of nuclear and radiation safety in the regions was implemented by eight regional State Inspections of the SNRIU. Today, we have seven, one of them (South- Eastern Inspection) was transferred from Donets’k to Zaporizhzhya. Communication with the Crimean State Inspection was lost, since September 2014, it was subordinated by the Rostekhnadzor of the Russian Federation”, Deputy Chairman of the State Nuclear Regulatory Inspectorate Tetiana Kilochytska says.

According to SNRIU experts, about 1200 radionuclide radiation sources and 65 nuclear entities lost state regulatory control in the Eastern territories beyond the Ukrainian control. Category I radiation sources whose activity is over 1000 Ci represent the most significant risk in terms of potential hazard. Eight nuclear entities and USC Radon are responsible for their management.

The situation on radiation safety for nuclear entities in the territories beyond the control was significantly worsened. The device to search for contraband containing radiation sources with barium-133 at the border checkpoint “Izvaryne” was destroyed. The radioisotope icing alarm device  (RIO-ZA) containing radiation source with 90 Sr + Y-90 burned on a plane at the Donetsk airport. Fifteen radiation sources with Sr – 90 + Y – 90 within RIO-3 installed on the planes in separate rooms of the Luhans’k International airport and Luhans’k Aircraft Repair Plant were destroyed.

Reliable information about facilities in the Eastern territories beyond the control of Ukraine is also not available. There is no information on companies Donets’k Coal Energy Company and Luhans’kvugillia including 14 coal mines with available 112 radiation sources of category III by potential hazard level. There is no information also on the state of temporary shut down radioactive waste storage facility located in the territory of Donets’k state factory of chemical products whose adjacent territories experienced strong explosion at the end of 2014.

Unfortunately, under military operations, the law enforcement bodies and the Ministry of Defense failed to arrange safe transfer of the enterprise. Therefore, at the beginning of 2015, activity of the Donets’k Specialized Plant was suspended until the termination of military operations. Available radioactive waste remained in the temporary storage facility of hangar type in two containers. Today, service sector of the enterprise was transferred to the Dnipropetrovs’k SISP.

Situation in the Autonomous Republic of Crimea

Due to the annexation of the Autonomous Republic of Crimea in 2014 by the Russian Federation, Ukraine lost regulatory control over such nuclear facilities as research reactor IR-100 of the Sevastopol National University of Nuclear Energy and Industry and two subcritical assemblies with low-enriched and natural uranium. In addition, in Crimea there are several companies and medical institutions using devices and containers with radiation protection of depleted uranium and high-level radiation sources (7 institutions, mainly oncological centers).

Taking into account Resolution of the UN General Assembly of 27 March 2014 “The Territorial Integrity of Ukraine”, the IAEA informed Ukraine on continuation of applying its safeguards in accordance with its Charter and the international law. Therefore, the IAEA applies the safeguards to nuclear materials and facilities in the territory of Crimea and in Sevastopol in accordance with the Safeguards Agreement between Ukraine and the Agency and its Additional Protocol.

However, licensees located in Crimea in 2015 did not submit any report on the results of physical inventory of radiation sources. Therefore, at the beginning of 2015, the State Nuclear Regulatory Inspectorate of Ukraine decided to terminate activity of the Crimean State Inspection on Nuclear and Radiation Safety by its reorganization. From that moment, the state regulation on nuclear and radiation safety in the territory of Crimea is not exercised.

Since September 2015, the Crimean State Inspection was subordinated by Rostekhnadzor of the Russian Federation. In compliance with “Ordinance of the Council of Ministers of the Crimea No. 1174-r of 11 November”, all property appropriated by illegal government of the Autonomous Republic of Crimea was transferred to the territorial administration of the Federal Service for Ecological, Technological and Nuclear Supervision of the Russian Federation.

At the same time, enterprises in the territory of the Autonomous Republic of Crimea lost the possibility to transfer radwaste (spent radionuclide radiation sources) to the Odessa SISP for storage.

“Today, it is impossible to perform licensing and state supervision in nuclear energy use in the Anti-Terrorist Operation Zone and in the Crimea.  We also cannot impact the situation in order to ensure safety at the licensed facilities”, Deputy Chairman of the State Nuclear Regulatory Inspectorate Tetiana Kilochytska said.

Due to forced restrictions in giving access to certain locations of nuclear material in the territories beyond the control, IAEA inspectors did not have the possibility to conduct inspections.

Taking into account unstable military and political situation in the country, annexation of the Crimea, beginning of military operations in the East, additional threats and in order to prevent provocations, mass disturbances, and illegal actions with radiation-hazardous facilities since January 2014 until now, the state physical protection system was transferred to the increased readiness state.

“Currently, for Ukraine it is strategically important to restore regulatory control over nuclear and radiation facilities in the territories beyond the control. After termination of the military operations  and return of these territories under the control of Ukraine, the Inspectorate shall ensure physical inventory of radiation sources and start search for lost radiation sources”, Tetiana Kilochytska concluded. According to her, it will be necessary to perform periodical safety review of nuclear and radiation facilities and inspection of physical protection, accounting and control of nuclear materials at these facilities.

We Have a Lot to Learn from Ukrainians on Physical Protection of Nuclear Fa... 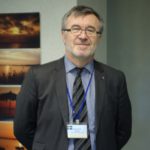 B-8 Reference Source Detected in Kharkiv
Scroll to top