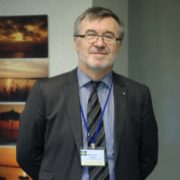 This was stated by Zlatan Delalic, representative of the Swedish Radiation Safety Agency (SSM), within the XIII Ukrainian Conference on Physical Protection, Control and Accounting of Nuclear Materials that was held from 3 to 7 October in Netishyn, Khmelnytsk Oblast. “Ukraine has faced a lot of challenges under conditions of the hybrid warfare. There are fifteen power units and many radiation hazardous facilities in this large country. The improvement of their physical protection is an urgent need and an important component of public safety. Today the country is making great efforts in order to overcome the threats and challenges. I think that Ukraine’s experience is representative, so we have a lot to learn from our Ukrainian colleagues”, said SSM representative.

Currently, ten power units at three nuclear power plants are under operation in Sweden. Previously, there were thirteen units and three of them are now closed. “Frankly speaking, Swedish and Ukrainian energy strategies are a little different. Sweden does not envisage the construction of new power units, while Ukrainian authorities plan to construct the third and fourth units of Khmelnitsky NPP”, said Zlatan Delalic.

“Regarding spent nuclear fuel, it is currently transported from all over Sweden to the centralized storage facility located nearby Oskarshamn NPP. The storage consists of cooled spent fuel pools carved into rocks at a depth of 30 meters under the ground where the spent fuel can be stored during 30-40 years”, the expert continued.

In the early 90’s, Swedish authorities began active seeking of sites for the placement of the final storage facility for spent nuclear fuel. More than 200 million euros were spent on research.

“SKB company is involved into the design process. SKB submitted an application form for its construction to the Swedish Radiation Safety Agency. The document is now in progress. If our conclusions are positive, the documents will be submitted to the Environment Court and then to the government. I think that in 5-10 years we will solve this issue”, summed Zlatan Delalic.

167 Pieces of Equipment for Work with Radioactive Materials to be Supplied to...