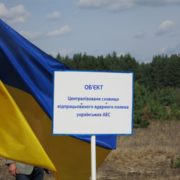 The Energoatom Company informed on this with reference to Oleksandr Rybchuk, Director General of Separated Entity “Atomproektengineering”.

“Start of the active phase of construction at CSFSF site is expected in March 2017. The State Nuclear Regulatory Inspectorate of Ukraine recently received the Safety Assessment Report on the centralized spent fuel storage facility, and we are waiting for SNRIU’s answer on this Report within one month. The reparatory activities to accept Holtec equipment to be used for spent nuclear fuel directly at the plants are simultaneously performed at Ukrainian NPPs”, Rybchuk specified.

He is convinced that loading of the first spent fuel batch to HI-STORM container systems, in which it will be transported and stored at the site of the centralized SFSF, will be held in late 2018.

An additional agreement to the Contract on equipment supply to the centralized SFSF was signed during the meeting of the company managers (Amendment 8). This agreement envisages development and implementation of the modified and improved technology of spent fuel management at Ukrainian NPPs. This additional agreement was signed by Oleksandr Rybchuk from the Energoatom Company and Riaz H. Awan, Vice-President of HoltecInternational.

Reference. In the absence of own repository, Ukraine should spend every year about $ 200 million for services related to transfer and processing of spent nuclear fuel on the territory of the Russian Federation. The Contract on CSFSF construction between the Energoatom Company and HoltecInternational, the winner of the corresponding tender, was signed in 2004, but for several reasons including changes in political circumstances, the Project was actually frozen for a long time. Normal work under this Project was renewed in 2014.

In March 2016, the Cabinet of Ministers of Ukraine informed on the plans until the end of this year related to approval of the design estimates for construction of the centralized spent fuel storage facility in the Chornobyl exclusion zone for fuel from Ukrainian NPPs. On 12 October 2016, the Cabinet allocated for CSFSF construction a plot of land with the total area of 45.2 hectares in the exclusion zone (Kyiv oblast).