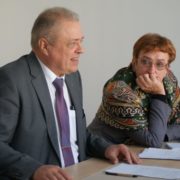 On 19 October, a joint meeting of the Public Councils of the State Nuclear Regulatory Inspectorate of Ukraine and the State Agency of Ukraine on Exclusion Zone Management (SAEZ) was held.

Vitalii Demyaniuk, the Head of SAEZ civil council, opened the meeting: “today’s event is for us a precedent; we hold this meeting for the first time. Frankly speaking, the initiative came from the SNRIU Public Council. We supported it, since we had a lot of common issues”. The first issue was the discussion of “The Strategy for Overcoming ChNPP Accident Consequences and Remediation of the Territories Contaminated by Radiation”. The second issue was devoted to the problematic situation of PIVDENENERHOMONTAZH Ltd. caused by unlawful actions of the third parties.

“This is the second attack on the strategically important nuclear power enterprises during this year. The first incident was the well-known blocking of Energoatom Company accounts, and the second one is current illegal seizure of PIVDENENERHOMONTAZH Ltd., said Olha Kosharna, Director on Information and Public Relations of the Ukrainian Nuclear Forum Association. “The company has all the technological and industrial prerequisites to win the tender for construction of the centralized spent fuel storage facility (CSFSF). However, due to the current illegal seizure, PIVDENENERHOMONTAZH Ltd accounts were blocked”, Olha Kosharna said. “The criminal case was opened. In order to facilitate the investigation, the Ukrainian Nuclear Forum Association developed an official appeal to the National Anti-Corruption Bureau of Ukraine, Security Service of Ukraine, Ministry of Internal Affairs and Ministry of Justice”.

Vitalii Demyaniuk, the Head of the Public Council of SAEZ, joined the discussion: “This issue is of great importance, the President of Ukraine was already informed on this situation. In fact, the term of ISF-2 commissioning may be postponed due to the illegal seizure of the enterprise. In turn, this will lead to significant commercial losses, because ISF-1 lifetime should be extended.

After hearing everyone, the representatives of the both Public Councils unanimously supported the position of the Ukrainian Nuclear Forum Association and signed the appeal to the National Anti-Corruption Bureau of Ukraine, Security Service of Ukraine, Ministry of Internal Affairs and Ministry of Justice. Yurii Urbanskiy, the Acting Director of the National Ecological Center of Ukraine, advised the State Nuclear Regulatory Inspectorate to write an official letter to the above structures by the example of SAEZ.

The third issue was devoted to the development of the State Environmental Program for Radwaste and Spent Nuclear Fuel Management”. “In 2011, Directive 2011/70/Euratom was adopted in the European Union, under which all EU Member States are obliged to develop the national programs for radioactive waste and spent nuclear fuel management. The Directive clearly states that the programs should cover all spent nuclear fuel that exists on the territory of the state”, informed Serhii Bozhko, the Chairman of the State Nuclear Regulatory Inspectorate.

The situation has been developed today in such a way that the State Environmental Program of Radioactive Waste Management under support of SAEZ is valid in Ukraine. In 2017, the term of validity of this program expires. There is no state environmental program for spent nuclear fuel management including spent fuel of all nuclear facilities (nuclear power plants, research reactors, etc.) in Ukraine. The Ministry of Energy and Coal Industry of Ukraine decided to avoid taking on the development of the Program.

Given the Decree of the President of Ukraine No. 141/2016 of 13 April 2016 “On the Development of the National Program for SNF Management at National NPPs on the Basis of Council Directive 2011/70/EURATOM of 19 July 2011, the development of the Program is now a priority.

“The SNRIU and SAEZ are ready to bear responsibility for this. The negotiations are ongoing related to IAEA support to the development of the Joint Program”, Serhii Bozhko added.

The Public Council representatives supported SNRIU and SAEZ initiative. Vitalii Demyaniuk said that the development of this Program would significantly contribute the Radwaste Fund segregation and its proper functioning. The issues were also discussed at the meeting related to radiation safety monitoring procedures during commissioning of the New Safe Confinement in the Exclusion Zone and the results of public hearings on ZNPP-2 lifetime extension. 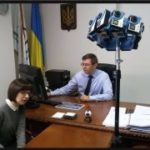