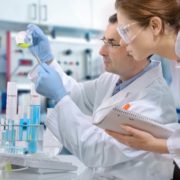 The achievement of modern medicine, especially in the high tech diagnostics and treatment, are based on the results of different physical research efforts. This was told by Anatolii Dovbnia, Director of Institute of High-Energy Physics and Nuclear Physics of the National Scientific Center “Kharkiv Institute of Physics and Technology” and corresponding member of NAS of Ukraine.

“Currently, medicine has many achievements. The relationship between medicine and physics has always been close. The physicists have a leading role not only because they use the latest high-tech developments, but also because they actively participate in scientific research. Physics today is actively developing”, he stressed.

Anatolii Dovbnia also said that the scientists today are not standing still and the development of new technologies of treatment is ongoing”.

“Scientists today are not standing still. Here is an example: several new technologies have been developed at Kharkiv Scientific Institute. Using of a compact neural oscillator with a needle, which is introduced into the human body and from the tip of the needle the neutrons are flying is one of the technologies. Actually, such a neutron treatment has long been used, but when neutrons are flying to in the human body, they irradiate everything in their path. However, we developed this technique to irradiate only those places, where it is necessary to cure a disease. These are microreactors. We have been funded by the USA.

One more example is that there are very advanced stages of cancer. In such cases, isotopes can be used. In Ukraine, isotopes are supplied from the specialized reactor developed for these purposes. With these isotopes, injections can be made for people to feel more or less normal. These products are produced by a reactor and there is only one available in Kyiv. This area shall be further developed. We succeeded in using electron accelerators for better quality”, he said.

Therefore, Anatolii Dovbnia said that the lack of adequate funding today is the main problem of scientific research.

“Unfortunately, the situation with science is critical, since the question of funding is acute. Even salaries are not paid, so the situation with funding of research is even worse. Physics is under active stage of development and there are plenty of research. We even do not need to construct anything new. We just need some funding. For example, there is radiation medicine, which has many achievements, but is not very developed in Ukraine due to the lack of funding. Ukrainian science has many achievements and the only way of its improvement is to find interested people, who will finance the implementation of new techniques”, he said.

After Renewal of Nuclear Status, Ukraine Will Be an Outsider — Kopchynsky

Chornobyl-Fukushima: Five Years of Teamwork Ahead
Scroll to top