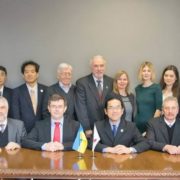 On 4 November 2016, Vitalii Petruk, Head of the State Agency of Ukraine on Exclusion Zone Management, and Kazunao Shibata, Director of Global Environment Department of the Japan International Cooperation Agency (JICA) signed the Memorandum aimed at improved radiation monitoring of the environment in the Exclusion Zone.

Teams of Japanese and Ukrainian researchers and representatives of state authorities jointly developed draft documents and draft Memorandum of Intent “Improvement of Radiation Monitoring of the Environment and Legislative Framework in Ukraine for Environmental Remediation of Radioactively Contaminated Sites”.

It is expected that the Memorandum will be signed in Japan in December 2016. The active stage of project implementation will start in April 2017 and will last for five years. 12 scientific and research organizations and 2 relevant executive authorities will participate in the project for Ukraine. Two governmental agencies financing the program and two research institutions will participate for Japan.

“Our states join forces to overcome consequences of the accidents on a global scale: Chornobyl and Fukushima. I believe that results of our cooperation will have a positive impact on the development and technical aspects of the system for radiation monitoring of the territories suffered from radioactive contamination”, said Vitalii Petruk.

Representatives of the Japanese delegation thanked the Ukrainian colleagues for assistance in preparing for the project and expressed hope that results of joint Japanese-Ukrainian scientific and technical project will be beneficial for the humankind.

According to the Memorandum of Intent, the main project objectives are:

– ensure monitoring and modeling for new zoning of the Chornobyl Exclusion Zone;

– obtain new knowledge of long-term behavior of radionuclides in the environment;

– use Ukrainian and Japanese experience in overcoming consequences of radioactive contamination.

The research will be performed applying state-of-the-art equipment to be purchased and supplied in Ukraine with costs envisaged for the project implementation. After completion of the research, the equipment will remain at the disposal of Ukrainian scientific and research institutes (establishments). Efforts of Ukrainian scientists, the use of premises and equipment of scientific and research institutions will be the contribution of the Ukrainian side into the international project implementation.