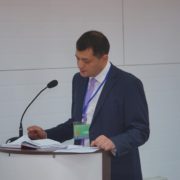 On 9 November, workshop “Management System of Knowledge, Work Processes and Electronic Documentation Flow. Information Security” was held in the International Exhibition Center. The event was hosted by the State Scientific Center for Nuclear and Radiation Safety (SSTC NRS) jointly with the Administration of the President of Ukraine. According to the Presidential Administration, during the last two years, e-government area significantly progressed in Ukraine. A number of projects were implemented such as E-Data portal to monitor public finances, portal of electronic petitions to the President and e-declaration. ProZorro electronic public purchasing system was launched and is in operation now. Citizens have the possibility to get biometric passports. In addition, an electronic system of free access to the information on the property rights to real estate was established. The electronic Apostille and other services available previously only in the old bureaucratic paper way were implemented.

The Electronic Documentation Management System was developed by personnel of the Presidential Administration. The work on the system started in August 2014 and already on 1 February 2015, it was put into trial operation.

In March 2016, the Presidential Administration announced free transfer of the system to state institutions and authorities. The State Scientific and Technical Center for Nuclear and Radiation Safety was the first state enterprise in Ukraine where the Electronic Documentation Management System (EDMS) was implemented.

“We implemented the Electronic Documentation Management System in June, currently it is in trial operation”, SSTC expert Serhii Kravtsov said. “Today more than two hundred employees in our organization use the system. Since January 2017, paper documentation flow in the SSTC will be terminated forever.

Prior to EDMS implementation, the SSTC needed a system for knowledge management. Experience on the implementation was adopted from SSTC partners, GRS German Company that uses the system for more than 10 years.

The next step for SSTC was selecting a platform. According to the results of market monitoring, “Microsoft SharePoint” was preferred. Security of network perimeter and endpoints in the SSTC is ensured by “Check Point” company.

“Since March 2016, our organization established a knowledge portal for communication of personnel and easy information feedback”, Serhii Kravtsov concluded.  “The work on portal improvement is under way, now we are trying to transfer all business processes into electronic space to the maximum. Development of platforms for internal processing of reviews and development of internal documentation is in priority”.

After developing a mobile EDMS client for managers by the Presidential Administration, the SSTC also plans to implement this area on its own platform.