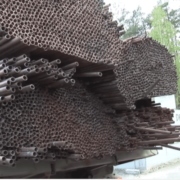 Employees of Zhytomyr Detachment of the State Border Guard Service of Ukraine revealed over five tons of radioactive scrap metal in Kyiv oblast.

The press center of the State Border Guard Service of Ukraine reported this.

Border guards revealed a place of radioactive scrap metal accumulation in Kyiv oblast and reported this immediately to employees of Ivanovo Regional Department of the National Police. Within the criminal case, the private households of the resident on the border were subjected to search. Over five tons of black and other metal with radiation content exceeding permissible limits by ten times were found in the yard of the households.

Ukraine and the EU Signed the Memorandum for Updating the Strategic Energy ...
Scroll to top