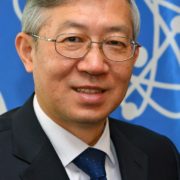 This was announced by Yang Dazhu, Deputy Director General of the International Atomic Energy Agency (IAEA), on official ceremony of moving the New Safe Confinement over the Shelter and destroyed ChNPP unit 4. “Today, we have witnessed a historic event, one that contributes significantly to the remediation of the effects of the accident at the Chernobyl Power Plant. We have watched as the arch was moved to cover the ruins of the fourth unit of the Chernobyl Plant. This is a commendable and exemplary effort that has brought together skills and expertise from many countries”- Yang started his speech.

According to his words, the Chernobyl accident challenged the entire international community, specifically in examining how the world can comprehensively prevent or, in the worst case, react to and mitigate the short- and long-term consequences of a nuclear accident. One of the primary lessons of Chernobyl is that the international community must stay vigilant and united in the face of such situations.

In the months after the accident, two global agreements were adopted and entered into force: the Convention on Early Notification of a Nuclear Accident, and the Convention on Assistance in the Case of a Nuclear Accident or Radiological Emergency. These conventions significantly strengthened the world’s nuclear safety regime. They were followed in 1996 by the entry into force of the Convention on Nuclear Safety. This convention commits States with nuclear power plants to maintain a high level of safety through adherence to international benchmarks, based largely on IAEA Safety Standards. These three conventions have become the corner stones of a global safety regime.

“The IAEA continues to participate in UN wide efforts to address specific needs in the region. Since 1990, over 15.5 million US dollars in assistance has been provided through national and regional technical cooperation projects, aiming to reduce the impact of the disaster”, Yang Dazhu said.

In the last 10 years alone, the IAEA has implemented 13 technical assistance projects, carried out as part of the UN Action Plan. These projects have focused on: radiological support for the rehabilitation of affected areas; remediation of affected territories using environmentally sound technologies; assistance to Ukraine in decommissioning Chernobyl NPP units 1, 2, 3 3 and Shelter.

For the upcoming technical cooperation cycle, additional projects are in the design stage at the moment.

“One key lesson that Chernobyl taught us all was that technology by itself cannot be relied upon to ensure safety. The attitudes and behavior of management and employees also play a vital role as part of something that is now referred to as safety culture”, stated IAEA Deputy Director General. “The world has united behind a global nuclear safety regime. On the part of the IAEA, I assure you of our support and that we will tirelessly continue our work to ensure the utmost safety in the application of nuclear power”.

President met with the Special Envoy and Coordinator for International Energy...
Scroll to top