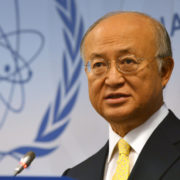 The representatives from the member states of the International Atomic Energy Agency (IAEA) pledged to strengthen the global nuclear safety by enhancing combat against illicit trafficking of nuclear and radioactive materials.

They included appropriate obligations into the ministerial declaration adopted unambiguously.

It is reported that the declaration was approved the first day of the conference on nuclear safety, which was opened on 5 December in Vienna and will continue until Friday. About 200 delegates from 130 countries and 17 international, regional and non-governmental organizations came to participate in it.

They discuss nuclear safety situation in the world and exchange views on strengthening the storage mode of hazardous materials.

Addressing the delegates of the conference, Yukiya Amano, IAEA Director General said that ensuring effective nuclear safety is important for all countries, including those where the amount of nuclear and radioactive materials is insufficient or they are absent at all.

“Terrorists and criminals will try to take advantage of any gaps in the global nuclear safety system. Any country in any part of the world can be used as a point of transit. Moreover, any country may be the subject of attack. That’s why effective international cooperation is a necessity”, Amano said.

At the same time, he underlined that significant progress in strengthening nuclear safety was achieved around the world, but one shall move beyond the achieved goals.

“It is important to remain vigilant under conditions when nuclear threat is becoming a new form”, IAEA Director said.

President met with the Special Envoy and Coordinator for International Energy...