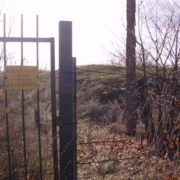 Unfortunately, Ukraine has lost today the regulatory control over nuclear facilities on territories beyond control of Ukraine: in Donetsk and Luhansk regions and the Crimea.

Until recently, the state regulation of nuclear and radiation safety in the regions was conducted by eight state regional inspections of the SNRIU. Today only seven were left because one of them (South East) was transferred from Donetsk to Zaporizhzhya. Communication with the Crimean Inspection was lost, and since September 2014, it was passed to control of the Federal Service for Ecological, Technological and Nuclear Supervision “Rostekhnadzor” of the Russian Federation.

According to SNRIU experts, due to the absence of regulatory control, about 1,200 radionuclide radiation sources and 65 nuclear entities were left on territories beyond control in eastern Ukraine. The greatest risk in terms of potential hazard pose category I radiation sources the activity of which makes up over 1000 Curie. Eight nuclear entities and the Donetsk Specialized Plant of Ukrainian State Corporation UkrDO “Radon” are responsible for their management.

As of October 2014, the infrastructure of the Donetsk Specialized Plant was damaged resulting from warfare in Donetsk. The Cabinet of Ministers of Ukraine decided to transfer the enterprise to production area of the Dnipropetrovsk State Specialized Plant. Unfortunately, law enforcement bodies and the Ministry of Defense did not manage to arrange safe transfer of this enterprise. As a result, in early 2015 its activity was suspended until the end of military actions. Existing radioactive waste was left in temporary hangar storage facility in two containers.

There is not enough reliable information on the facilities located on territories beyond control in eastern Ukraine. The fate of companies “Donetsk Coal Energy Company” and “Luhanskvuhillya” that subordinate 14 mines with existing 112 radiation sources of category III according to their potential hazard is unknown.

There is also incomplete information on the current state of radioactive waste disposal site (RWDS) located on lands of the Donetsk State Factory of Chemical Products.

The history of RWDS construction originates back in 1961. The site was designed for disposal of waste and radiation sources generated resulting from the activity of the research and medical institutions in the region. At the time of construction, RWDS was within the structure of the Donetsk Specialized Plant. In 1966, the site was temporary shut down and passed to control of the Donetsk Plant of Rubber Technical Goods. Today it is called the Donetsk State Factory of Chemical Products.

The radioactive waste disposal site is located on the edge of Donetsk. It is a reinforced concrete structure buried in the ground and covered by concrete slabs. The length of the site is 20 meters, the width is 10 m, the depth is 3 m, and its capacity makes up about 600 cubic meters. As of 2002, the site was in about two-thirds full of the design capacity, and this is about 400 m³. The total gross mass of disposed radwaste was 11,674.5 kg; total activity was 19.6 Ci (7 × 1011 Bq). In 2002-2004, the Scientific and Technical Center for Decontamination and Comprehensive Radioactive Waste Management performed comprehensive inspection at RWDS. Resulting from this inspection, the project of the site radwaste retrieval was developed. By the time, the site contained various solid radioactive waste with different mass and composition: low-level waste generated resulting from the activity of the research and medical institutions; overalls and individual protection means contaminated by radiation; low-level waste in form of decontamination products (rags, soil, plant debris, filters); radiation sources in lead and metal protective containers and cemented wooden boxes and iron barrels. In 2004, the project has passed a comprehensive review and was recommended for approval. Funding of work was planned by the Donetsk City Administration and the State Budget of Ukraine. However, this work has not been performed due to lack of funds.

In 2008, the measures aimed at radioactive waste retrieval from RWDS were included into the National Target Environmental Program of Radioactive Waste Management in form of a separate item. However, the practical implementation of the project has not been started. Today, military actions in the ATO area do not allow performing this work.

The territory of the Donetsk State Factory of Chemical Products is currently controlled by militants. At the end of 2014, a massive explosion occurred on this territory. Unfortunately, there is no clear information on damage of the disposal facility or radiation background on the edge of Donetsk.