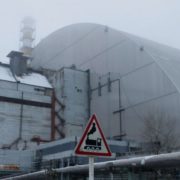 A new system will be launched, and the hardest stage of activities in the exclusion zone will start at the end of this year after completion of all activities inside the new confinement at ChNPP unit 4. According to Olha Kosharna, the representative of the Ukrainian Nuclear Forum Association, the old Shelter located under the arch should be further dismounted, and melted fuel mixed with concrete should be withdrawn in compliance with the documents accepted in 2001. It should be further disposed in containers according to the nuclear and radiation safety standards.

“No one knows yet how to solve this issue because there are very high radiation fields harmful for people. But a strategy for this should be developed urgently”, she said.

Olha Kosharna highlighted, the partly implemented project is unique since the countries jointly allocated funds for its implementation for the first time, and the European Bank for Reconstruction and Development administered these activities. Project cost is 1.5 billion dollars.

“This is the world’s only and unique building structure. It is sophisticated in terms of engineering approach, as well as original. Unfortunately, this does not solve all issues. Its lifetime is 100 years, and it will be commissioned this fall”, the representative of the Ukrainian Nuclear Forum Association underlined.

Further activities at ChNPP will be significantly expensive, she said.

“If all activities will be performed in compliance with the rules, namely sorting, loading into containers and disposal, the sums of about 100 billion dollars are mentioned. In compliance with the rules, those 200 tons of fuel melted there with metal and concrete should be disposed in deep geological formations. We have never constructed such a facility before. We have not selected a site and we do not even have any strategy”, Olha Kosharna underlined.

At the same time, the expert noted that the implementation of such projects requires a balance between the economic advisability and safety issues, it is very important. Construction of photovoltaic power plant and creation of natural park is currently planned in the exclusion zone.

“The ground is highly contaminated by transuranium elements such as plutonium; there is no sense to decontaminate it because it is very expensive. Especially, because no economic activity other than facility operation related to Chernobyl NPP is planned on this territory”, she commented.