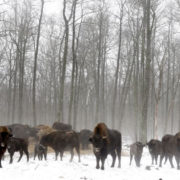 Bison 30 kilometers away from Chornobyl NPP

Scientists have revealed that during several years wild animals came back to the Chornobyl zone, the publication of Newsweek Polska said. Journalists concluded that animals feel safer here than before.

In early 2016, video cameras of Ukrainian and British scientists have recorded here a brown bear. The last time he was seen in the woods on the outskirts of Chernobyl over 100 years ago. Not only rare species of birds and rodents came back there but also moose, deer and beavers. Catfish one meter long and other fish swim in the water bodies with clear crystal water. Large predators, lynx and wolves came also back.

For the first time during many years, Ukrainian biologist Maryna Shkvyria revealed a large pack of wolves in the vicinity. “It was enough to reach the hill and begin to howl to hear a quick respond of wolf cubs from the forest area”, Maryna Shkvyria said in her interview for National Geographic.

Scientists have noticed there recently herds of Przewalski’s horses, not only adults, but also healthy young stallions. “The absence of people in the exclusion zone for 30 years has become a very a favorable factor for the nature. The nature grew so intensive that the greens covered the ruins of houses. Animals feel perfect there because people do not interfere”, Newsweek Polska wrote.

“Frontiers in Ecology and the Environment” journal published earlier a paper of Dr. Jim Bizley from the University of Georgia (the USA). He researched 14 species of mammals near Chornobyl and concluded that their number has not decreased; it even increased since the disaster.

Why animals came back to the Chernobyl zone? Is it because the feel safe in this zone or they just cannot feel hazard?

Even among animals that live for years in the exclusion zone such as flies, birds or small mammals, zoologists have not revealed many genetic mutations. Reports were rarely drawn up on individual tumors or deformed beaks of birds. Swallows were subjected to the only scientifically proven mutation. Albinism of swallows was revealed. This disease means lack of pigment in skin and feathers. As a result, swallows got completely white.

Danish zoologist Anders Pape Muller, who researched the environmental system not only in Chornobyl, but also around Japanese nuclear power plant “Fukushima”, concluded that major mutations were observed in both places, but immediately after the disaster. Later, the animals felt much better.

Dr. Timothy Muso from the University of South Carolina (USA) tried to explain this phenomenon. According to him, some mammals and birds have adapted to exceeding radiation in the region so that it even influenced their health positively.

Andrii Ozharovskyy, Russian physicist and expert in nuclear projects of the International Environmental NGO “Bellona” stated in his interview for Radio “Svoboda” that he strongly disapproved the thesis on positive impact of radiation on animals: “People left the area; this is the reason why animals reproduce there. The version that the cause of forming “paradise for animals” there not because the absence of human influence, but because of presence of radiation, is a profanity. In addition, the research of mice and higher vertebrates demonstrated that animals in the area got sick; there is a high percentage of pathology and oncology in comparison with similar populations in the reserves. Therefore, animals in the zone suffer from radiation in the same way as people would suffer, if they were there”.

The results of the British- Ukrainian research performed by Transfer-Exposure-Effects (TREE) gave more data on radiation impact on animals and vegetables in the zone. Scientists have to calculate precisely the risk of exposure after contamination. Perhaps, the study will confirm that fear of staying in the Chernobyl zone is completely unjustified. The absence of people in this place is definitely an advantage for animals. Perhaps, resulting from this disaster we will see over time one of the few strongholds of wild life in the world”, Newsweek Polska suggested.

Applications from Investors for the Chernobyl Exclusion Zone Expected until...
Scroll to top