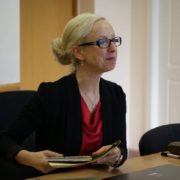 Katherine Deufrains, Officer of the International Atomic Energy Agency responsible for cooperation with Ukraine, informed of this during the working visit to Ukraine. The meeting took place on 25 January 2017 in the State Nuclear Regulatory Inspectorate of Ukraine. “Launch of national production of radiation pharmaceuticals will significantly contribute to the development of medical industry in Ukraine. We are ready to contribute to the launch of production of isotopes such as iodine-131 (I-131) and technetium-99 (Tc-99). Unfortunately, the IAEA cannot allocate funds for pilot component of isotopes that were not certified yet, such as platinum-195 (Pt-195) and promethium-149 (Pm-149)”, Ms. Deufrains said.

Volodymyr Storizhko, the representative of the Institute of Applied Physics of the National Academy of Sciences of Ukraine, informed that production of radiation pharmaceuticals is currently absent in Ukraine. “We purchase isotopes in Uzbekistan, Poland and Russia. It would be advisable to launch own production at the Nuclear Research Institute in Kyiv and on the basis of the Kharkiv Institute of Physics and Technology. Volodymyr Storizhko, representative of the Institute of Applied Physics of the National Academy of Sciences of Ukraine

Volodymyr Trishyn, expert of the Institute for Nuclear Research of NASU, confirmed that the Institute has technologies for production of iodine-131 and technetium-99. Costs for modernization are still needed. First, costs for the reconstruction of radiochemical laboratories and their equipping by “clean air” installations. Volodymyr Trishyn, expert of the Nuclear Research Institute of the National Academy of Sciences of Ukraine

In addition, in the framework of the working visit to Ukraine, IAEA Officer Katherine Deufrains participated in the discussion of two not less important issues: establishment of the National Center of Biological Dosimetry in Kharkiv and strengthening of SNRIU capabilities in state reviews.

Applications from Investors for the Chernobyl Exclusion Zone Expected until...