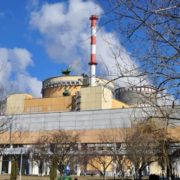 Preparation for transport of spent fuel assemblies to the centralized spent fuel storage facility is underway at Rivne NPP. Rivne NPP, which is operated by the Energoatom Company, started testing of the  procedure for spent fuel unloading from NPP reactors, further transfer to railways and transport to the centralized spent fuel storage facility (centralized SFSF) in Kyiv oblast.

The Press Service of the Energoatom Company informed of this.

“Preparation for transport of spent fuel assemblies to the centralized spent fuel storage facility (centralized SFSF) is underway at Rivne NPP. Optimal process of spent fuel loading into containers and movement at the industrial site is being determined using transport container simulators”.

The Press Service informed that the work should be performed exceptionally during pre-commissioning activities.

It was emphasized that “the whole way of container transfer from reactor to railway platform is tracked”.

“All preparatory activities at RNPP from inspection of buildings and structures to loading of spent nuclear fuel on railway platforms, including preparation and agreement of documentation, are divided into separate blocks that will optimize both performance and control of all activities”, Kovtoniuk said and added that performance of all activities is coordinated during weekly meetings with participation of the technology owner Holtec International Company, Energoatom Company, Kyiv Research and Design Institute Energoproect, State Nuclear Regulatory Inspectorate of Ukraine and expert organizations.

The Agreement for construction of the centralized SFSF between the Energoatom Company and the winner of appropriate tender Holtec International Company was signed at the end of 2004, but due to several reasons including changes in the political situation and the economic crisis in 2008, the project was actually frozen.

In April 2016, the postponement of centralized SFSF launch to the end of 2018 was announced due to the absence of funds for the project and problems related to land plot allocation for the storage facility.

According to Serhii Bozhko, the Chairperson of the State Nuclear Regulatory Inspectorate of Ukraine, the storage facility will be constructed in compliance with the international nuclear safety standards.

On 12 October 2016, the Cabinet made a decision to allocate land plots with the total area of 45.2 ha in the exclusion area (Kyiv oblast) for construction of the centralized SFSF.

In early November 2016, the SNRIU approved the conclusion of the State NRS review based on the previous safety analysis of the centralized SFSF.

Arrangement of Construction Site for Centralized SFSF to Be Completed in August...
Scroll to top