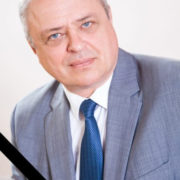 The Uatom.org staff informs with deep sorrow that Sergiy Bozhko, Chairman of the State Nuclear Regulatory Inspectorate of Ukraine, passed away on Monday, 6 February 2017.

Sergiy Bozhko was sincerely devoted to his calling in life, loved his job above all, was a sensitive man, and caring father and son. His heart was full of pure, disinterested love to Ukraine.

He had the courage to take responsibility for making important decisions, defended the interests of the country at the international level, and had the authority in the IAEA and other international organizations devoted to nuclear and radiation safety.

His experience and examples of wise behavior will be useful for more than one generation of Ukrainians.

Sergiy Bozhko was born on 26 October 1958 in Kyiv. In 1982, he graduated from the Kyiv Polytechnic Institute with a degree in thermal power plants.

From 1982 to 1993, Sergiy Bozhko worked at the Kyiv Research and Design Institute Energoproekt. He participated in the design of the Paks (Hungary), Khmelnitsky and Rivne (Ukraine), Balakovo (Russia), and Belene (Bulgaria) Nuclear Power Plants.

Since 1993, Serhii Bozhko worked in the state nuclear regulatory authority on various positions. From 2005 to 2011, he was Deputy Head of the State Nuclear Regulatory Committee of Ukraine. The main area of responsibility was state regulation of safety at nuclear installations.

Sergiy Bozhko also dealt with the development of international documents on the safety of nuclear installations and was continuously involved in international activities on nuclear and radiation safety.

In 2014, Sergiy Bozhko was appointed Chairman of the State Nuclear Regulatory Inspectorate of Ukraine.

In 2016, the President of Ukraine awarded a commemorative medal ‘25 Years of Independence’ to Sergiy Bozhko for significant personal contribution to the establishment of independent Ukraine, affirmation of its sovereignty and strengthening of international authority and for significant contribution to nation building, socio-economic, cultural, and educational development, active social and political activities, as well as diligent and impeccable service to Ukrainian people.

The Uatom.org staff grieves and expresses sincere condolences to the bereaved family and shares their grief.

The memory of Sergiy Bozhko will forever remain in our hearts.

Ministry of Foreign Affairs Identified Priorities for Ukraine Presidency in...