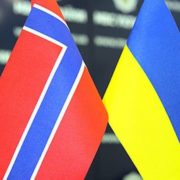 Within the technical assistance, today in Transcarpathia, the border guards of the Mukachevo detachment received equipment for detection of radioactive materials and radioactive substances, protection, decontamination and dosimetry.

Representative of NorSik Agency on radiation and radioactive protection of Norway, founder and project leader Pavel Tishakov arrived to transfer equipment provided to Ukraine by the Government of Norway through the Norwegian Radiation Protection Agency (NRPA). The ceremony was attended by the management and personnel of the Mukachevo border detachment.

Furthermore, the event was attended by representatives of the Ministry of Economic Development and Trade of Ukraine, State Agency of Ukraine for the Exclusion Zone and contractors of the project in Ukraine.

During the delivery, operation of the equipment was shown to the audience and importance of such projects in Ukraine was highlighted.

It should be noted that this project is implemented within the bilateral Agreement between the Cabinet of Ministers of Ukraine and the Government of Norway. This project is the first for the Border Guard Service under cooperation with Norwegian donors and, if effectively implemented, would allow further cooperation in this area.